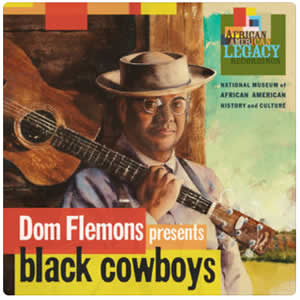 Dom Flemons ” Black Cowboys” new album is one to listen to if you dig seriously old-school folk music (formerly a founding member of Carolina Chocolate Drops with Rhiannon Giddens) and Cavern of Anti-Matter for your deep elecrto-ambient instrumental groove music needs. Dom Flemons Presents Black Cowboys” sheds a light on the music, culture, and the complex history of the golden era of the Wild West. In this single volume of music, the first of its kind, Dom Flemons explores and reanalyzes this important part of our American identity. The songs and poems featured on the album are meant to take the listener on an illuminating journey from the trails to the rails of the old west. This is a century old story that follows the footsteps of the thousands of African American pioneers that helped build the United States of America.”