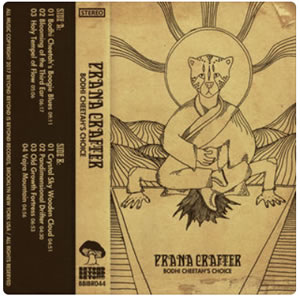 Prana Crafter’s Beyond Beyond is Beyond debut is an electric walk in the woods. “Bodhi Cheetah’s Choice” soars, rambles and flows through the heavy fog of psychedelia. The music of Prana Crafter is most easily tagged “acid folk” but such a reduction misses the electronic and avant-garde influences and synthesized meditations.  Will Sol stands ready with a new cassette release under the Prana Crafter banner for psychedelic wellspring Beyond Beyond is Beyond, and it is certainly an example of psych-folk at its finest. Though, while the excitement of a new poster child for the sound is tempting, I hate to back him into that corner alone, as it seems a disservice to his brand of psychedelia on the whole.  Without pledging devotion to anyone, Sol invokes great spirits of the past with acoustic and electric guitars, synths, and hand drums. Not so much an album as it is a channeling, “Bodhi Cheetah’s Choice” needs to be heard by the third ear.

Bhodi Cheetah’s Choice is dank with the moss of the best-burrowed forest psych with bubbling acoustic strums in a vat of synth guitar. But Sol folds in haunting ambiance, through organ moans, electronic thrums and the rhythmic hum of field recordings. He’s imbued the record with a haunting sadness that gives the whole album an otherworldly quality. It’s psych-folk for all intents and purposes, but bigger and more affecting than any one genre can conjure. The label’s not entirely offbase to associate this with the more experimental work of Fahey (see perhaps his work for Table of the Elements), but even as a one-man band he’s pushed this into territories once occupied by heavy improv psych masters ¬– Popul Vuh, Träd, Gräs & Stenar, Amon Düül II.

With this record, Sol has marked himself one to watch from here on out. Prana Crafter may well climb the ranks to sit alongside the likes of Six Organs of Admittance and Vanishing Voice-era Wooden Wand in terms of the modern day psychedelic luminaries. The same audience that loved the slightly melted third generation audience tapes of 72-74-era Dead will find their new favorite modern alchemist when they give “Bodhi Cheetah’s Choice” a spin.

Here’s hoping that with enough groundswell will bump this one up to a full vinyl release rather than the cassette ghetto that Prana Crafter’s found himself in previously. This one deserves the fuller spectrum to spread its discomfiting burn.

The album can be purchased on Bandcamp.