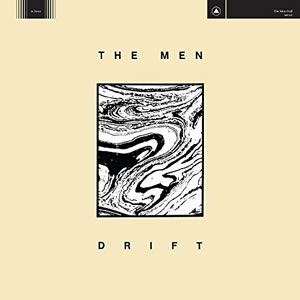 The Men. It’s a straightforward name for a band that’s anything but. The Men, a 4 piece noise rock band formed 10 years ago in NYC. Since then these rockers have tried their hand at everything from  psych-folk, Dad-Rock, garage punk to country and usually this is in the span of one album!. With the exceedingly appropriate named Drift, the band seems to find even more sounds to try, while still hitting the sonic cornerstones of their most notable work.  Yet the NYC four-piece’s seventh album is the first where such mutability occurs both at the micro and macro levels — that is, song to song but also with respect to what we’ve known the band to sound like. But each change can now be traced to a previous incarnation of The Men, providing a context that was not there the first time they went from post-punk raucousness to scrappy acoustic guitars to channeling the Stones.

We’re severely disoriented right off the bat by the opener, “Maybe I’m Crazy,” an industrial heavy sound we haven’t heard from them before that’s spiked with a vexing whisper. It grows to full-on yelling just as Rich Samis’ drums join the mix of menacing synths and a kind of squeaky sax. It’s a feel that’s echoed in “Secret Light,” which brings back the freaky whispering and elementary school jazz band sax.

Since this is The Men, you know throw a curveball (or five) was imminent. This album’s left-hook comes courtesy of the jammy, gently rambling number “Rose On Top Of The World,” is number that no doubt the jamband set will absolutely love. The whiplash continues with “When I Held You In My Arms,” its moody keys, late-night bass, and mellow cymbal taps with a slow tempo and sparse sound. They hit right back with the crunchy, piss-quick, audio assault “Killed Someone,” playing to all their strengths with fuzzy, Fugazi-like fury. It’s a reminder of where they came from, but also a jarring departure from the track that comes before.

Amazon:
/
Update Required To play the media you will need to either update your browser to a recent version or update your Flash plugin.