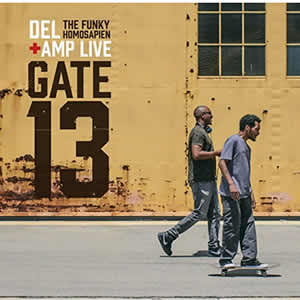 Gate 13 is here to make every stoner’s paradise much more enjoyable. Gate 13 is an album sprawling with so many genres, unexpected sounds, and super aggressive bars that it feels like it is a universe of its own. Their first-ever joint album is probably the opposite of what today’s average millennial rap fan expects. After collaborating with Del on his Radiohead Raindays Remixes album in 2011, Amp knew he had to team up with him again for another project. But what started out as an EP quickly evolved into a top-notch album that flaunts their clear musical chemistry.

“We both have unique tastes in music,” Amp says. “That’s why we fit so well together. We can talk about all kinds of stuff. We can talk about punk, the real hood and grimy, and even jazz stuff. When you get two people together with eclectic tastes, you can come up with all kinds of stuff, which can either cause problems or make things go phenomenal.”

As Amp steers listeners through every clever sample and knockout transition, Del leads the way with a sort of battle rap-esque rhymes, flows and punchlines. “I watch battle rap all the time because it’s pretty much the only place that I can get that real street hip-hop feel,” Del says. “Everything else is pretty much diluted for the most part. But through that, I discovered that [a lot of battle rap] is basically comedy or humor writing, and 50 percent of it is wordplay.”

After a vibrant introduction gets us hooked, Del jumps effortlessly from a hypish EDM-based loop to a smooth island-inspired melody in Gate 13’s lead single “Wheel Of Fortune” before continuing on through trippy interludes like “Fly Away” and “Funkrolla 3.0.” Although the genre of each instrumental switches up literally every minute, the Gorillaz collaborator battles and then controls every complex beat he comes across.

“At first I was kind of mad,” Del replies. “I was like, ‘Why did you get rid of the beat?’ The rap came from that original beat. The beat was so crazy that I was like ‘What the fuck? What’s wrong?’ But I was just being biased about what it was before and not being more open-minded. After I got over that, I had to step back and be like ‘Nah, I see what you’re doing.”‘

Despite the melting pot of outlandish sounds, Del often comes across as completely comfortable and totally in his element. Songs like “Sit Ya Ass Down” and “Gravy Train” allow him to deliver his trademark slick bars about fending off haters trying to ride his wave. On the standout “Far Beyond,” Del and Zyme glide over unique drum pattern and funky guitar loop as Goapele blesses the chorus with her angelic voice.

As the album nears the end, the songs only get more off-the-wall. Del vents some obvious frustrations on a dubstep-inspired, funky, cut “Get Some of Dis,” while the closing track “Lateral Thinking” is an abnormal cacophony of trap-like melodies, saxophone riffs and random synths. “I wanted to do things more raw and add the live musician elements because when we do shows and stuff, it would be tight to bring that to life on stage,” Amp says. “I never really seen Del in that type of setting.”

Soon he will: Del and Amp plan to take their eclectic odyssey to major cities across the nation this fall.