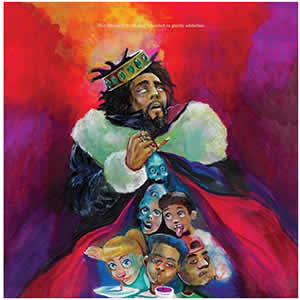 ‘KOD’ – the North Carolina rapper’s fifth studio album and he is not holding back while he tackles themes like drugs, demons and addiction for the majority of its 12 tracks. Cole is acutely keen to caution his fans, rap peers and society in general about this delicate and deadly serious set of topics. He’s already delivered three separate definitions for its acronymic title – Kids on Drugs, King Overdosed, Kill Our Demons – no one could possibly have a doubt about this projects and artists current hyperfocus.

This decade Cole has emerged as one of the US’s finest rappers this decade. He’s an extraordinarily confident and forthright lyricist with an amazing ear for a hook, a gutsy ability to address difficult subjects and the keen ability to weave compelling stories through his music. Cole creates what he and his many, many fans (including Barack Obama) refer to as his ‘Cole World’. After his guest-heavy 2013 album ‘Born Sinner’, Cole pared down Cole World by releasing the follow-up ‘2014 Forest Hills Drive’ without any guest vocalists at all. Clearly, his formula worked: that album is still his biggest-selling album to date, while it broke streaming records (just as he’s done once again with ‘KOD’), elevated his superstar status. That album has since gone two-times platinum, and the arrival of ‘KOD’ has been widely expected to continue his hot streak.