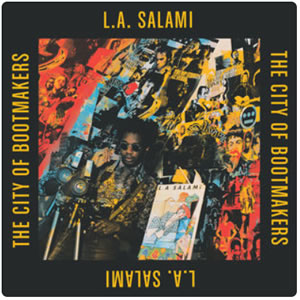 The City of Bootmakers

L.A. SALAMI “The City of Bootmakers”

L.ASalami’s newest album, “The City Of Bootmakers,” edges slightly out of the folk territory and more into rock, with flourishes of organ coloring the soundscape, and peppy beats giving a buoyancy to his garrulous lines. Because of, or quite possibly in spite of, the kaleidoscope of these songs, Salami advises listeners to take on the new record with space to find their clarity, or just enjoy them.

“I think people should listen to my music as they’re lying down to go to bed, it probably should be headphones,” Salami said. “But if you don’t wanna risk ear damage, listen to it on the stereo I guess.”