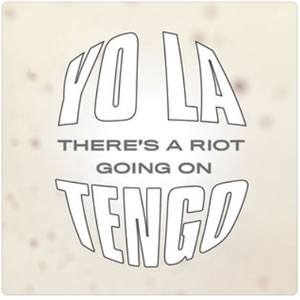 There’s a Riot Going On

YO LA TENGO “There’s a Riot Going On”

Sly and the Family Stone’s 1971 album of the same name was a full-on record, reacting to extraordinary times. Yo La Tengo’s 15th album, ‘There’s a Riot Going On’ offers sounds nothing like its namesake (to the surprise of precisely no one). It, too, is a reaction to tense times, but this album is written as a much calmer reaction, which is presented as such a mellow, easy-breezy album. Yo La Tengo’s new album from these indie-rockers darlings is sweet, lulling and ponderously thought-provoking. Moreover, this LP is one of their most stellar recent offerings.

Largely improvised, often obviously meditative, these 15 tracks find Georgia Hubley often taking the lead on guitar, offering up ambient passages – like “Dream Dream Away,” a strummed interlude and a thing of beauty. On “Esportes Casual,” a loungey Bossanova tinged song that, though sweet, doesn’t quite fit in with the rest of this immersive listen on the first listen of the album. In contrast, Georgina Hubley leads on “Shades of Blue,” a country-tinged, almost gentle ballad on which the percussionist/singer croons about her depression amid a soft guitar and accompanying tambourine. The chorus that Georgia Hubley sings softly on the second track “Shades of Blue” serves almost as a mission statement for the trio: “Whenever I see you, there are shades of blue.” The song exemplifies the group in other ways: its jaunty rhythm which is clearly taken directly from 60s beat pop (befitting the band members reputation as old-school vinyl collectors) but recast into something similar to sleepwalking yet soothing. The song is an exercise in restraint that harkens back to the Velvet Underground’s self-titled third album. “She May, She Might” echoes like a trippy, folky Pink Floyd number. On “For You Too,” James McNew’s bass puts all four to the floor, with the fuzz pedal turned all the way up, but Ira Kaplan refuses to rise to the bait, picking arpeggios in and around the bass lines instead of wigging out while quietly and succinctly murmuring his vocals. Loops, which are employed on both “Above the Sound” and “Ashes,” simmer but never really bubble over. “Forever,” with its glorious “shoo-wop, shoo-wop” refrain, double bass and Kaplan crooning over shape-shifting percussion: it’s gorgeous and elusive, the perfect expression of Yo La Tengo’s blending of rock classicism and ambiance.

Yo La Tengo premiers brand new songs from ‘There’s a Riot Going On’ at National Sawdust in Brooklyn on 2/28/18. Video by Pitchfork Live