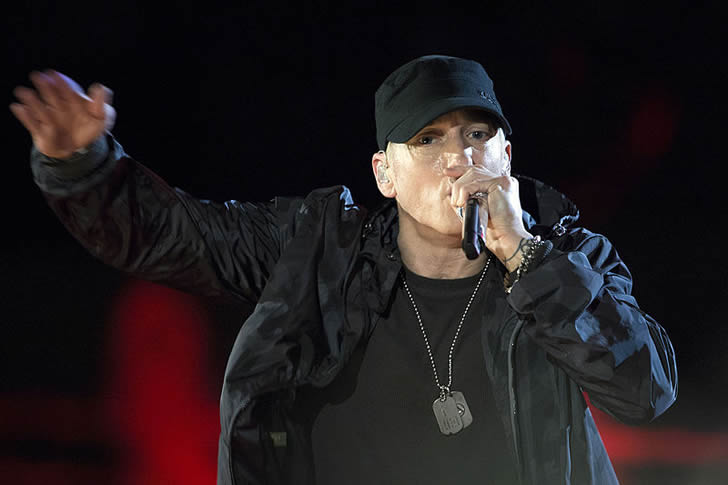 Eminem is an iconic rapper, record producer and actor known as one of the most controversial and best-selling artists of the early 21st century.

American rapper, record producer and actor Eminem was born Marshall Bruce Mathers III on October 17, 1972, in St. Joseph, Missouri.  Eminem had an extremely turbulent childhood and home life. He never knew his father, Marshall Mathers Jr., who abandoned the family when Eminem was still an infant; moreover, he rebuffed every one of his son’s many attempts to contact him during his entire childhood. As a result, Eminem was raised by his mother, Deborah Mathers. Even though she was a single mother, she never managed to hold down a job for more than several months at a time. This necessitated Eminem and his mother to move frequently between Missouri and Detroit, Michigan, including spending large chunks of time in public housing projects. “I would change schools two, three times a year,” Eminem later recalled. “That was probably the roughest part about it all.”

This nomadic lifestyle left a huge impact on his personality. He had no close friends and kept primarily to himself. He felt he was treated like an outcast at every new school he attended. Obvious to anyone that has listened to his lyrics, Eminem has been scathingly critical of the way his mother raised him and the choices she made while he was growing up. Through his song lyrics, he has publicly accused her of being addicted to prescription pills; additionally, subjecting him to physical and emotional abuse. Yet, Deborah Mathers has vehemently denied all such accusations and early on in his career, in 1999, she filed a $10 million defamation lawsuit against her son. They settled the case for $25,000.

Eminem attended Lincoln High School in Warren, Michigan, a suburb of Detroit, where he failed the ninth grade three times, never graduated and eventually dropped out at the age of 17. Despite being a poor academic student in school, Eminem always had a deep affinity for language and words, devouring comic books and even studying the dictionary. “I found that no matter how bad I was at school, like, and no matter how low my grades might have been at some times, I always was good at English … I just felt like I wanna be able to have all of these words at my disposal, in my vocabulary at all times whenever I need to pull ’em out. You know, somewhere, they’ll be stored, like, locked away.”

Though he was a teenage dropout, Eminem found a way to express his passion for language, as well as to release his youthful anger through the emerging musical genre of rap/hip-hop. He identified with the nihilistic rage of late-1980s and early-1990s rap music and he was especially very into with N.W.A., the legendary and highly controversial gangster rap crew from Los Angeles.

At the time Eminem entered the Detroit underground rap scene rap music was almost exclusively produced by black people. Eminem was the polar opposite of black, with his pale white skin and bright blue eyes, nevertheless, he stormed onto the scene as a frequent competitor in legendary rap “battles.” Battles were one on one competitions in which two rappers take turns insulting the other through improvised rap lyrics in front of a crowd who cheered on both rappers until the crowd determines a winner. Out of the gate, Eminem proved to be a formidable opponent as he was highly skilled at such verbal sparring and in spite of his race, he quickly became one of the most revered and respected figures in Detroit’s underground rap scene.

He recalled, “I finally found something that yeah, this kid over here, you know, he may have more chicks, and he may, you know, have better clothes, or whatever, but he can’t do this like me. You know what I mean? He can’t write what I’m writing right now. And it started to feel like, you know, maybe Marshall’s gettin’ a little respect.” During his early rap battles, Mathers assumed the stage name M&M, a playful reference to his initials. He later began writing his moniker phonetically as “Eminem.” During this period of Eminem’s life, he was working odd jobs to make ends meet while participating in rap battles and desperately attempting to land a record contract.  Eminem’s story was later dramatized and made into a movie which chronicles Eminem’s semi-autobiographical film, 8 Mile.

It was also during this period that Eminem began dating his future wife Kim Ann Scott. In 1995 the couple had a daughter and named her, Hailie Jade Scott. Eminem was inspired by the birth of his first born daughter to make a living as a rapper.  In 1996, Eminem released his first independent rap album, Infinite. Though the debut album Eminem displays egregious flashes of his verbal prowess, biting wit and flair for storytelling. Unfortunately, the low-budget record failed to turn a profit or attract more than local attention.  However, a year later, Eminem released The Slim Shady EP, which was discovered by Dr. Dre, the legendary rapper and former producer of Eminem’s favorite rap group N.W.A. Eminem traveled to Los Angeles to compete in the 1997 Rap Olympics MC Battle, in which he placed as runner-up. Dr. Dre got the rapper’s cassette from Jimmy Iovine and listened to it in the basement of Iovine’s home. Dre was so impressed that he immediately signed Eminem to his Interscope Records label. In 1999, after two years of working with Dre, Eminem released The Slim Shady LP. The heavily hyped record became an instant classic and went on to sell over three million copies. Eminem’s first single, “My Name Is,” mixed a childish humor and energy with rampant profanity and flashes of violence—a potent and fascinating combination that felt different from anything else in rap. Marshall and Kim Mathers married later that same year.

Eminem released his second studio album, The Marshall Mathers LP, in May 2000. The album showed off Eminem’s poetic talents as well as his emotional and artistic range. His songs vary from manically funny (“The Real Slim Shady“) to heartbreakingly poignant (“Stan“) to explosively violent (“Kim”) to disarmingly self-critical (“The Way I Am“). The Marshall Mathers LP sold over 19 million copies worldwide, won the Grammy Award for Best Rap Album, received a nomination for Album of the Year and is widely considered among the greatest rap albums of all time.

Nevertheless, The Marshall Mathers LP also came under a hailstorm of criticism for its excessive use of profanity, the glorification of violence and drugs and its apparent misogyny and homophobia. Eminem tried to mitigate the criticism by maintaining that his lyrics and rhymes use the rough language he has been surrounded by since childhood. Later Eminem, performed a duet with Elton John at the 2001 Grammy Awards to demonstrate his openness to the gay community; nevertheless, Eminem remains widely reviled in some communities for his offensive lyrical content.

In 2001, Eminem reconnected with several of his friends from the Detroit underground rap scene to form the group D12. They recorded an album called Devil’s Night featuring the popular single “Purple Pills.” A year later, Eminem released a new solo album, The Eminem Show, another popular and critically acclaimed album highlighted by the tracks “Without Me,” “Cleaning Out My Closet” and “Sing for the Moment.” His next album, 2004’s Encore, was less successful than his previous efforts, but still featured popular songs such as “Like Toy Soldiers” and “Mockingbird.”

For the next several years, Eminem recorded very little music and was completely consumed by his mounting personal problems. Eminem and Kim Mathers divorced in 2000 but continued to maintain a tumultuous off-and-on relationship until remarrying in 2006. Nevertheless, they divorced again several months later and began a years-long, ugly and highly public custody dispute over their daughter Hailie. During this period, Eminem slipped further into alcoholism and an addiction to prescription pills and sleeping pills. In December 2007, he overdosed and nearly died. “If I would have got to the hospital two hours later, that would have been it,” he said.

By early 2008, Eminem finally returned to recording music and managed to kick his addictions to drugs and alcohol. He released his first album of new music in five years, Relapse, in 2009, featuring the singles “Crack a Bottle” and “Beautiful.” In 2010, Eminem released another album, Recovery, his highly autobiographical attempt to come to terms with his struggles with addiction and his experience with rehabilitation. His most acclaimed album in years, Recovery struck a kinder, somewhat gentler and more inspirational tone than his previous music. Eminem said, “I don’t want to go overboard with it but I do feel like that if I can help people that have been through a similar situation, then, you know, why not?” The revealing album won Eminem a Grammy Award for Best Rap Album.

As much as any other individual artist, he is responsible for rap’s transformation into a mainstream music genre over the past decade. And after almost 20 years and eleven albums, the rapper who shocked, appalled and fascinated the music world with the unbridled rage of his youthful music is reinventing himself as a mature artist. Eminem is doubtlessly one of the most acclaimed rappers in the genre’s brief history.  Some people consider him the GOAT (greatest of all time).

“I started learning how to not be so angry about things, learning how to count my f—ing blessings instead. By doing that, I’ve become a happier person, instead of all this self-loathing I was doing for a while,” Eminem said. “The music, I wouldn’t say it’s gotten happier, but it’s definitely more upbeat. I feel like myself again.”

Eminem released his eighth album, MMLP2, on November 5, 2013. The announcement for the future Grammy-winning album, formally titled The Marshall Mathers LP 2, was made during the 2013 MTV Video Music Awards. On the awards show, Eminem leaked a snippet of the first single from his album, entitled “Berzerk.” He went to reach of the top of charts with “The Monster,” a track that also featured Rihanna and earned a Grammy for Best Rap/Sung Collaboration.

In 2014, Eminem celebrated the 15th anniversary of his Shady Records label with a special two-CD set called ShadyXV. The collection features the label’s most popular songs as well as some new material. The new single “Guts Over Fear” quickly rose up the charts after its late October debut.

In October 2017, Eminem made headlines for a freestyle segment known as a cypher, taped for the BET Hip Hop Awards, in which he ripped into President Donald Trump. Two months later, he released his ninth studio album, Revival. Its first two singles, “Walk on Water” and “River,” featured collaborations with pop superstars Beyoncé and Ed Sheeran, but the album as whole divided critics and failed to garner the accolades notched by his previous efforts.

While four years passed between Eminem’s eighth and ninth albums, fans only had to wait a few months before he dropped his next studio effort, Kamikaze, on August 31, 2018. The surprise album kicked off with “Ringer,” which featured the rapper diving right back into his disdain for President Trump.