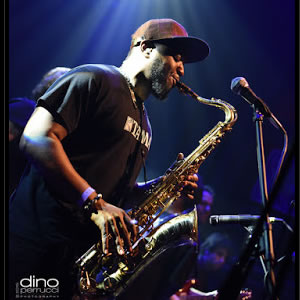 The two-time Grammy nominated Berklee graduate, who grew up playing in his family’s church choir hears from his Dad this story of his early musical prowess.

James Casey has made quite the name for himself lately. As a previous member of the Lettuce/Soulive family, he’s been an official member of Trey Anastasio Band for the last few years, and is currently wrapping up his first full tour with pop star Meghan Trainor. Hired as a saxophone player for the Meghan Trainor tour, Casey now sings John Legend‘s verses for the radio hit “Like I’m Gonna Lose You” in their live performances.
The two-time Grammy nominated Berklee graduate, who grew up playing in his family’s church choir hears from his Dad this story of his early musical prowess. “My dad was a choir director at the church that we grew up in and my mom played piano, and obviously when they’re both at choir rehearsals, the kids had to be there too. They had me and my brother and my sister there. I was 2, my brother was 4, my sister was just born, something like that. They had rehearsal and my dad was teaching a song and apparently I just busted out laughing and couldn’t stop laughing the whole time. He came over and was like, “Hey, what’s wrong? What are you doing? What are you doing?” I said, “The tenors are off.” I just kept laughing. That was at 2. I don’t know the veracity of it, but my dad’s been telling that story since I was a kid.” He started playing saxophone the same year he got his drum set when he was 9. When 5th grade came around, he realized that he had to play the saxophone. “I could have played anything, but I really wanted to play the saxophone.”

Fast forward to James getting a scholarship to Berklee School of Music in Boston, the most prestigious music school in the country. At school in Boston any instrumentalist who was worth anything that came out of the Berklee had their own night at this club Wally’s.When he first got to school there, Sam Kininger had a night at Wally’s. Sam Kininger is the old saxophone player for Lettuce and Soulive.

Sam Kininger was up on stage at Wally’s there and James would watch Sam play twice a week every week on Sunday nights and Tuesday nights He was taking it all in. He had learned vocabulary there. Soon after leaving Berklee, he moved to Brooklyn he was in a band with Louis Cato (the multi-instrumental current and original member of the band for The Late Show with Steven Colbert, who’s now his brother in law, and started a band called Six Figures. Within that same year, Sam Kininger decided he was going to take a hiatus from Lettuce and Soulive and James got a phone call at midnight asking him if I could fly out to L.A. the next day to take the saxophone role in Lettuce. He learned all this music on the flight, played it the next night and he was playing with Lettuce and Soulive for the next four years.

Jennifer Hartswick was a special guest at Bowlive Soulive’s 10 night in a row run at Brooklyn Bowl in 2012. Suffice to say they hit is off both personally and musically. Six months later he got a text message that woke him up from Jennifer saying, “Trey’s about to call you.” He didn’t know who Trey Anastasio was, he didnt know who Phish was and then he got a phone call that would change his musical life. Funny enough he didn’t know the number so he didn’t answer it. It went to voicemail and the voice on the other end said, “Hi. This is Trey Anastasio. I have a band called Phish and I want to talk to you about joining my band the Trey Anastasio Band. Give me a call when you get a chance.” Since that day 5 years ago James has been in Trey Anastasio Band with Jennifer Hartswick.

During the time that Trey is on tour with Phish, James is on tour with superstar Meghan Trainor playing stadiums. About a month into the tour, he was at soundcheck. The band does this thing called soundcheck parties where people who paid for VIP tickets can come and watch them do a soundcheck. They were in the midst of soundcheck and the band was playing something and he was messing around singing into his saxophone microphone, and Meghan Trainor had her in-ears on and so she could hear it though she was nowhere in sight. She comes around on stage in her onesie with her arms wide screaming, “Oh my God, James! You sing, I didn’t know! You’ve got to sing a song with me” The next time at soundcheck, she’s like, “James, you just let me know when you’re ready.” So he sang his heart out.  James now sings John Legend‘s verses for the radio hit “Like I’m Gonna Lose You” every night in their live performances.  The best moment of his past year on stage was in Madrid with Meghan Trainor. They played the Barclaycard Center to like 18,000+ and at the time it was the biggest single room he’d ever played. The surreal part was going out to sing the duet (“Like I’m Gonna Lose You”)  and the stage had a catwalk into a big circle at the center of the arena. It’s a ballad, so people turn their phone flashlights on. Having all those people in a room surrounding him and singing all the words to a song that’s not their original language…was amazing. It was one of those times in life where after it’s over, he sat back and thanked God for all the blessings he has bestowed on him.  A go-to player for all things musical, meet James Casey.