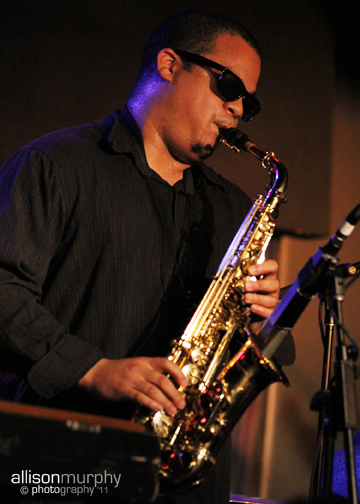 As a solo artist Sam Kininger has developed a distinctive, organic sound on the saxophone that is strongly expressive.

A saxophone legend, Berklee College of Music alum, and all-around funk genius, Sam Kininger is building his fan-base and repertoire simultaneously at clubs across the country. Kininger has been in legendary funk/soul groups since the beginning, including, but not limited to Lettuce, Soulive and the Brotherhood of Groove.  Additionally, has also been known to perform with a number of heavy hitters including Dave Matthews Band, DJ Quick and Wyclef Jean to name a few.

As a solo artist Sam Kininger has developed a distinctive, organic sound on the saxophone that is strongly expressive. He consistently demonstrates his technical dexterity and rhythmic precision while maintaining an honest and innovative exploration of musical improvisation.

His debut album includes completely original instrumental funk/jazz compositions. The grooves are intense and the solos are aggressively rhythmic and deeply soulful. Loaded with guest musicians, Sam Kininger’s album features some of the most talented musicians on the scene, including Eric Krasno (guitar) and Neal Evans (organ) from Soulive, the legendary Fred Wesley (trombone) from George Clinton’s Parliament and James Brown’s JB’s, and Adam Deitch (drums), a member of guitar legend John Scofield’s band, Lettuce and Break Science.

Sam Kininger’s original funk band, which also features Amy Bowles on Key’s, Aaron Bellamy on Bass and Nikki Glaspie  (Beyonce/Dumpstaphunk) on Drums, has been blowing away audiences with their high-energy funk for about 10 years now, and their musical evolution and popularity is exponentially growing with each show. They have performed at many festivals throughout the country, including The New Orleans Jazz Festival (LA), The North Beach Jazz Festival (CA), Snoe.Down (NY), Bear Creek (FL) and Berkfest (MA). They have also had successful shows in clubs such as The Blue Note (NYC), The Mercury Lounge (NYC), The Elbow Room (CA), Tipitina’s (LA) and many others.

Sam was also a member of the internationally renowned Blue Note recording group Soulive, who has successfully toured the world and achieved outstanding record sales. During the summer of 1999, Soulive cut their first LP, “Turn It Out,”. It featured guests John Scofield and Oteil Burbridge (Allman Brothers). Then, in 2001, Soulive released their sophomore album, “Doin’ Something,” featuring legendary performer and arranger Fred Wesley on trombone. In February 2001, Soulive toured Japan, followed by a month long European summer tour that included stops in France, England, Spain, Switzerland, Italy, Belgium and the Netherlands. They band also did a run of stadium shows opening for the Dave Matthews Band.

On March 12, 2002 Soulive released their album NEXT. They incorporated their love for hip-hop and R&B creating the sounds for NEXT. They collaborated with Black Thought, Talib Kweli, Amel, Larrieux and Dave Matthews.

Sam continued to tour as a member of Soulive through 2003 after which he decided to spend more time focusing on his own, Sam Kininger Band.

After a 4 year break from touring with Soulive, Sam once again rejoined the band in early 2008 after making a guest appearance with them at the Brooklyn Academy of Music. He was soon joined by longtime Soulive/Lettuce collaborator Ryan Zoidis and the two were dubbed The Shady Horns. They have since released a new album, “Up Here” (Royal Family) and have completed national tours of the US and Japan.

On April 22, 2008, Lettuce made their return with their third album, “Rage!“,  out on Velour Records. A homage to the history of funk music, “Rage!” blends the old school with the new. Supporting their new album, Lettuce performed a number of live dates throughout the year including shows at New Orleans Jazz Fest, Fuji Rock Festival, All Good Music Festival, Newport Jazz Fest and Jamcruise.

Sam Kininger’s sophomore album, “Anthem”, was released in 2008 on the BMG-JAPAN label.