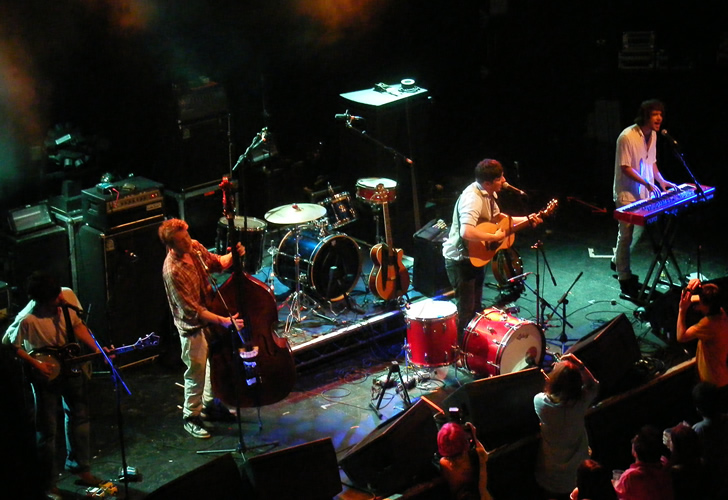 One of the most successful bands in the world and one of the most hard-working too. They play it like they really mean it. From the heart.

Three and a half albums into their career and Mumford & Sons find themselves at another turning point. They could take whichever direction they choose. So what’s it to be?

The world is a big old place, and Mumford & Sons want to see it all and meet everyone.

2016 was a fine example of that. Firstly, we’re all familiar now with the story of how nobody quite saw it exploding the way it did, quite so emphatically. Four amiable, talented lads from West London, one inexplicably clinging to a banjo. Give over, not a hope. And yet… BANG. One of the most successful bands in the world and one of the most hard-working too. Gigs upon gigs upon gigs. Jubilant, joyous gigs. One cornerstone starts to blur into the next and yet still it keeps on getting bigger, keeps on getting better. They play it like they really mean it. From the heart.

We digress… Back to 2016, then. A first trip out to South Africa. A couple of introductory ‘taster’ shows somehow turned into six sprawling sold-out, outdoor park dates. Historic. Epic. 85,000 tickets sold. There was one in Pretoria that particularly caught the eye. Thunderstorms like firework displays, and the tropical rain kicking up the dust. During some rare, brief downtime in Johannesburg, the band hit a makeshift studio at The South African Broadcasting Corporation with some friends. Senegalese hero Baaba Maal, Malawi’s The Very Best, and local favorites, Cape Town’s Beatenberg all hunkered down to see what would come of it together. That’s where the ‘half an album’ comes from, the gloriously affecting, collaborative ‘Johannesburg’ mini-album.

Then what? Well, for a band renowned for their relentless, far-flung touring, it was quite a surprise to learn that Mumford & Sons were yet to step foot in South America. When the lights went out on the South African trip, the party headed off for debut shows on the Lollapalooza run. Sao Pãolo, Brazil, Argentina, Chile.. Wild, raucous shows. Everyone giving it their all, on both sides of the barrier. They’ll be returning, that’s for sure.

Back in the UK, there were three big live moments to enjoy. A headline slot for Radio 1’s annual live extravaganza down in Devon, and then the Summer’s piece de resistance. London’s iconic Hyde Park in July. 65,000 fans going absolutely nuts one hazy Summer’s evening. Backed by an all-star cast throughout the day, Mumford & Sons typically rose to the (overwhelming sense of) occasion, and even the Johannesburg lads made the considerable effort to fly in and to take to the stage, performing a few tracks together from the, just released, mini-album. What a day. Another of those so-called ‘cornerstones’. Hyde Park. Tick.

Speaking of extraordinary outdoor shows, it would be prudent to mention the band’s own rolling festival series, The Gentlemen of the Road Stopovers. These community-mindful, community-minded and altogether exhilarating affairs have historically rolled up into towns and cities that don’t often enjoy regular live shows or are in the shadow of the nearby major cities. Huddersfield and Galway hosted the first GOTR Stopovers back in 2012, and they’ve since taken this rolling circus to the likes of Walla Walla, Troy, Guthrie, Dungog, Lewes, Monterey and Aviemore. The band is hugely proud of these events, hearing the people’s stories, and involving them all in the planning and orchestrating. It’s quite the undertaking, and that’s before the hand-written notes or emails go out inviting bands to play at them. On that score, they’ve done pretty well too. From Foo Fighters to the Flaming Lips, St. Vincent to Leon Bridges, Vampire Weekend to Dave. And having headlined Glastonbury and Reading & Leeds Festivals, GOTR partnered with the Latitude Festival 2017 in Suffolk, UK to bring a taste of the Takeover to a fully-fledged British music festival. No pressure, then. Just the small matter of finding forty quality, eclectic artists to route it into their Summer plans, let alone go and headline the bloody thing. But manage it they did, and the sun and sound lit up this pretty corner of the English countryside. The Takeover literally took-over Latitude. Tick.

Then later that year, in the Winter of 2017, the band headed out to Senegal to see their ol’ pal Baaba on home turf. They brought with them an artist whose music is never off the collective band stereo, the magnetic Maggie Rogers, and Maggie soon took to her socials expressing a certain giddiness at this new adventure and extolling the extraordinary virtues of ‘today’s studio’. Pals be plotting.

So, what next? Well, a few festival slots have just started to appear on the band’s website for later this Summer which tends to suggest that something is going on behind the scenes. One click later and you find yourself scrolling through their Instagram, currently documenting candid footage of the band in the familiar environs of a recording studio. Working hard. It’s too early to suggest album four is on its way, but an optimistic fan might have every reason to be enthusiastic.

Yet just maybe it’s a band who like to try different things, look curiously at things from a different angle, take another route.