New Riders of the Purple Sage

The New Riders of the Purple Sage signed to Columbia Records by Clive Davis, released its eponymous first album in September 1971 to widespread acclaim. 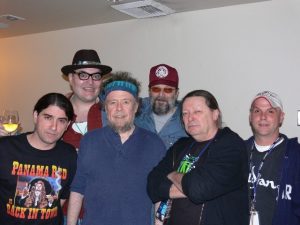 The New Riders of the Purple Sage signed to Columbia Records by Clive Davis, released its eponymous first album in September 1971 to widespread acclaim.  In the next 11 years, the band toured and released over 12 albums, selling over 4 million records.  NRPS began as a part-time spin-off from the Grateful Dead when Jerry Garcia (pedal steel guitar), Phil Lesh (bass) and Mickey Hart (drums) teamed up with John Dawson (guitar, vocals) and David Nelson (guitar).  Although early live appearances were viewed as an informal warm-up to the main attraction, the group quickly established an independent identity through the strength of Dawson’s original songs.  By 1970 Dave Torbert had replaced Lesh, and Spencer Dryden, formerly of Jefferson Airplane, had joined as the group’s permanent drummer.  Garcia remained in both The Dead and The New Riders until he found himself over committed, at which time Buddy Cage replaced him and the classic NRPS lineup was born. Original NRPS bass player Dave Torbert and drummer Spencer Dryden have passed away, co-founder John Dawson Passed away in 2009 due to ongoing health problems. His considerable talents will be missed but his songs and musical legacy will live on.  Before he passed he had given his blessing and was excited to know his music is being heard live again by a whole new generation of fans. The new lineup vows to keep the NRPS spirit and tunes alive by taking them to fans everywhere. The band recently teamed up with Grateful Dead lyricist Robert Hunter and released it’s first CD in twenty years to rave reviews, Where I Come From (Woodstock Records).

David Nelson has managed the seemingly impossible. He has remained true to his musical vision and integrity without becoming outdated or archaic in the process. Nelson, an important figure in the musical vanguard of the influential Haight-Ashbury music scene, that spawned the Grateful Dead. His ties to Jerry Garcia and Robert Hunter extend beyond that with The Wildwood Boys, a bluegrass band they formed together in 1962 in Palo Alto, CA. After the Dead got together, Nelson played guitar on three pivotal albums, Aoxomoxoa, Workingman’s Dead and American Beauty. Around the same time, Garcia bought a pedal steel guitar, which he enjoyed playing with John Dawson, a friend from the Palo Alto days. They formed the New Riders of the Purple Sage with Nelson and the Dead’s Mickey Hart and Phil Lesh. Nelson who sang one of New Rider’s biggest hits, a cover of bluegrass great Peter Rowan’s “Panama Red,” stayed with the group for 13 years, but left in 1982 and starting writing songs with longtime pal Robert Hunter, among others. Along the way, he was a member of the Good Ol’ Boys, featuring bluegrass legends Don Reno, Chubby Wise and Frank Wakefield. He also played in the Jerry Garcia Acoustic Band and is featured on their 1988 album, “Almost Acoustic.” Then in 1994, Nelson formed the David Nelson Band where he showcased his plethora of songs. In six years, DNB released four CDs. Three are live efforts: 1995’s Limited Edition, 1997’s Keeper of the Key, and 1999’s High Adventure in Japan, which is also a concert video. In 1999 Nelson released the band’s studio debut, Visions Under the Moon which was recorded in Portland, OR’s Aladdin Theater. Things have come full circle with Nelson at the helm of The New Riders.

Not only has Buddy Cage sold over four million records in his ten years with the NRPS, but he has also performed on many gold and platinum albums during his distinguished career including Blood On The Tracks (Dylan), Biograph (Dylan), The Official Bootleg Tapes (Dylan) and various releases with Ann Murray.  Cage has also recorded with Grateful Dead Members Garcia, Weir and Hart as well as with Dead lyricist Robert Hunter (on Tales of the Rum Runners); Ian and Sylvia (Great Speckled Bird, the seminal folk band of which Cage was a member); John Cipollina (Quick Silver Messenger Service); Mario Cipollina (Huey Lewis and The News); Rick James; Rick Danko and Garth Hudson (The Band); David Rea (Fairport Convention and Mountain); The Shondells; David Bromberg (with Bonnie Raitt); Pappa John Creach (Hot Tuna); Sly Stone; and Vassar Clements, to name a few.  No stranger to TV, Cage has appeared on numerous shows and specials from Della Reese, Joey Bishop and Mike Douglas to Richie Havens, Seals & Croft, Willie Nelson, Johnny Cash (Grand Ole Opry), Don Kirschner’s In Concert & Rock Concert series and the Midnight Special shows hosted by Wolfman Jack. Most recently Buddy can be heard on his show on Sirus Satellite Radio, Jam On  (channel 17) from 6 to midnight Monday through Friday

Ronnie Penque has been playing music for over 30 years.  When not working with NRPS or his band RONNIE PENQUE BAND, which includes his brother Chris Penque on guitar, Ron is busy as a session player. Ronnie started out as the original bass player in the popular Grateful Dead cover band Ripple. Through the years Ron has also played with many other bands and great musicians including Bobby Weir, Mickey Hart, Vassar Clements, Peter Rowan, Melvin Seals, Robert Hunter, John Popper, Pete Sears, David Nelson, Barry Sless, Keller Wiliams, Donna Jean Godchaux, Jeff Pevar, and Michael Falzarano.  After Ripple retired in 2003, Ron was asked by keyboardist Melvin Seals of The Jerry Garcia Band to join his band, “Melvin Seals and JGB.” A short time after joining Melvin and JGB, NRPS drummer Johnny Markowski came on board and the two developed a lock and key rhythmic feel on bass and drums that they brought to The New Riders. If the name Penque is familiar, Ron’s uncle the late Romeo Penque was one of the most famous woodwind and flute players in the industry who was best known for his work with Miles Davis. At age 12 Ronnie was taught to play bass by his father Ron Penque Sr., an accomplished session bass player for 20 years, who gave Ronnie his 57 Precision bass (Dads Bass) upon his retirement. Some of Ronnie’s musical influences are The Grateful Dead’s Phil Lesh, NRPS bass player Dave Torbert, Donald Duck Dunn, John Entwistle, Paul McCartney and Jack Casady, among others.

Johnny Markowski, an accomplished drummer, can be found playing his kit these days with The New Riders of the Purple Sage. When not on the road with The NRPS, Johnny works with his band, Stir Fried, and plays with various artists in many styles. Songwriting is also in his blood.  His father, Thomas Jefferson Kaye, was a legendary producer and songwriter in the 1960s and 1970s.  Markowski’s band, Stir Fried, known for its blend of swamp groove, psychedelic improvisational music performs signature versions of Kaye masterpieces in addition to Markowski originals.  The group has recorded and performed with the likes of Dr. John, Vassar Clements (Old & In The Way), Commander Cody, Buddy Cage (NRPS), Jo Jo Herman (Widespread Panic), Bernie Worrell (P Funk, Talking Heads), Derek Trucks (Allman Bros. Band) and Tony Trischka. Recently Jambands.com held a contest for the most impressive drummer/percussionist, and after two weeks of voting Markowski won hands down, beating out some pretty heavy competition.