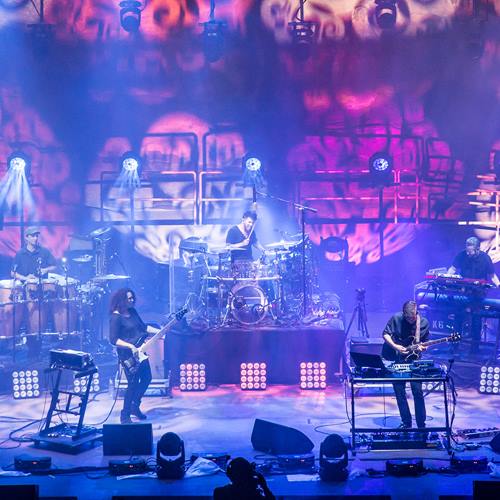 Since forming in Atlanta over a decade ago, instrumental electronic rock band STS9 has experienced a meteoric rise to the forefront of the international music scene.

20 years before the emergence of STS9, NASA sent Voyager 1 and Voyager 2 on a mission to the farthest reaches of the solar system and beyond. Each of these probes was equipped with identical Golden Records, special messages attached to what Carl Sagan called “a bottle launched into the cosmic ocean.” They contained numerous images and sounds from throughout the world, pieces of music from various cultures, a map identifying the location of our planet, and other information for whomever, or whatever, might find them.

While the Golden Records included greetings in 59 languages, they made no mention of nations and borders, wars and rivalries, or anything else that divides us. What they did mention was life, love, peace, birth–the things that bind us to one another and to the planet we call home.

The Universe Inside is a reflection of this message. It is a story about human identity and the magical truth of who we are, where we’re going, and our place in the Universe. It says we are one, made of stardust and the forces of nature that evolved over billions of years. Connected by the sun, moon and stars, we are the living, breathing conscience of the Universe.

“We are one, made from dust of the stars / down here we bear the weight of the pain and the scars / just want to live with nothing to hide / every one of us a universe inside.”

Since forming in Atlanta over a decade ago, instrumental electronic rock band STS9 has experienced a meteoric rise to the forefront of the international music scene. Consistently ranked among Pollstar Magazine’s list of top-grossing touring acts, STS9 continues to average over 5,000 tickets per city, boasting a genre defying list of opening acts along the way such as Snoop Dogg, Ghostland Observatory, Bassnectar, Thievery Corporation, Pretty Lights, Big Boi of Outkast and countless others. The band’s most recent tour has seen the band sell out multiple nights at The Fillmore Auditorium in Denver, the Fox Theatre in Oakland, Chicago’s Congress Theater and a mid-summer sold out performance at the legendary Red Rocks Amphitheatre in Morrison, Colorado.