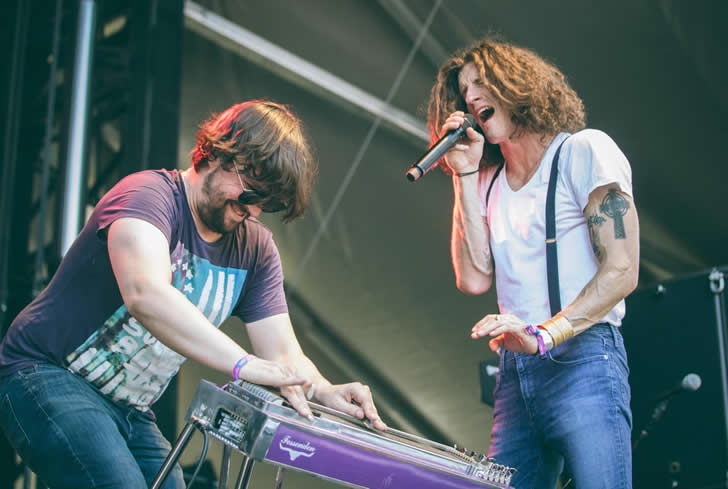 The Revivalists have managed to attract a wide range of listeners who are also no doubt drawn to their eclectic rock sound, which has a bit of swing and a...

A remarkable thing happened to The Revivalists as they came upon their tenth anniversary as a band. The New Orleans-based septet scored a game-changing hit with “Wish I Knew You,” a wistful song from their third album, Men Amongst Mountains. Guided by dynamic percussion and punchy horns, the single features a contagious hook and feel-good chorus that has resonated with fans across all different genres. Though the album was released in July of 2015 (debuting at No. 2 on the Billboard Alternative Albums chart), the band’s break out single “Wish I Knew You” has a rare and undeniable staying power. The song steadily picked up steam in 2016 spending over 40 weeks on the Billboard Adult Alternative Chart where it peaked at #1 and maintained for multiple weeks. By 2017, the song crossed to Alternative radio rising quickly to #1 and breaking the Billboard chart record for most single-week spins ever at Alternative radio. “Wish I Knew You” then peaked inside the Top 15 at Adult Pop Radio and ultimately spent 9 weeks in the Billboard Hot 100.

The meaning behind “Wish I Knew You” is up for debate and the band could not be happier about it. “Some of the best songs are the ones that don’t have just one meaning,” says vocalist David Shaw. “We love hearing all the different interpretations our fans have. Of course, the song talks about the idea of wishing for more time together earlier in life, but we’ve heard all different takes on who that someone is, what the message means, and even what point of view the lyrics are coming from. We hope that people make our songs their own and ‘Wish I Knew You’ is like a canvas that our fans have filled with their imaginations and personal experiences. That is what we want our music to do.”

The success of “Wish I Knew You” has opened many doors for the band, earning them praise from the likes of Rolling Stone, Entertainment Weekly, Buzzfeed, Flaunt, Paste and Interview, nabbing them a nod as a ‘YouTube Artist on the Rise,’ and landing them performances on Jimmy Kimmel Live! (the host called the song his “summer jam”), Conan, The Today Show, and The Ellen DeGeneres Show, where Shaw shared a rare and impromptu mid-performance dance with the star. “That was a surreal moment for us,” he marvels. “Never in my wildest dreams did I think I’d be dancing with Ellen DeGeneres!”

Comprised of acclaimed musicians David Shaw [lead vocals/guitar], Zack Feinberg [guitar], Andrew Campanelli [drums], George Gekas [bass], Ed Williams [pedal steel guitar], Rob Ingraham [saxophone], Michael Girardot [keyboard & trumpet], The Revivalists are recognized as an extraordinary live band. And while “Wish I Knew You” has had a seismic effect on their career, The Revivalists’ relentless touring over the past several years has played a major part in getting them to this point.

The band has sold-out headlining tours in 2015, 2016, and 2017, and performed sets at such marquee festivals as Bonnaroo, Governor’s Ball, Outside Lands, and Austin City Limits. This past year they were invited to perform on the main stage at New Orleans’ Jazz Fest (after six years playing the second stage) for 40,000 people, attracted 5,000 fans to their show at Central Park’s SummerStage in New York City, and visited cities like Toronto for the first time playing to packed houses.

“We did it by building a live audience and our fans bringing their friends to see us,” says Campanelli. “So when we got a song on the radio, it was tens of thousands of people saying, ‘Our band is on the radio!’ That has allowed it to expand because our fans are excited about it and are telling their friends. When we play the single, the new people who come to see us are not just holding up their phones for a video then leaving. They’re singing every word because they’ve become fans as well.” “Playing live is the lifeblood of this band,” agrees Shaw. “It’s how we connect. There’s no substitute for getting out there in someone’s face, letting them see the veins popping out in your neck, or sweat dripping off your knuckles as you strum a guitar.”

The four years that The Revivalists spent touring in support of their second album, City of Sound, informed many of the songs on Men Amongst Mountains, which was recorded live in just 21 days with producer Ben Ellman (Galactic, Trombone Shorty). Album opener “Keep Going” serves as an anthem for these road warriors. “Sometimes it was all of us packed into one hotel room,” Shaw recalls of that time. “If we were lucky, we got two or three hotel rooms to split, so there was no personal space. You’re eating fast food because you don’t have any money. Those were trying times and all of that hardship went into the lyrics.” The album’s title was inspired during the band’s stopover in Colorado where they were awestruck by the majestic grace of the surrounding mountains. “I feel like it’s a metaphor for being small in a vast, expansive universe and knowing you are essentially insignificant, but standing amongst the mountains, you are among the greats, so it kind of elevates you,” says Feinberg. “It’s an uplifting title.”

All members of The Revivalists share songwriting duties, with Shaw writing the lion’s share of the lyrics. “I draw inspiration from what is happening in my life and what I’m being influenced by at the time,” he says. “When life is tumultuous, I write more. When I’m in the light, a person like me is almost seeking the dark. But when I’m in the dark, I’m like ‘Get me out of this hole.’ Songwriting is an escape; a way to externalize a lot of internal feelings.”

By making the personal universal, The Revivalists have managed to attract a wide range of listeners who are also no doubt drawn to their eclectic rock sound, which has a bit of swing and a gritty Southern roots vibe. It’s inspired perhaps not sonically — they are not a heritage brass band — but spiritually by their adopted hometown. “The mood we create in a room makes people feel like they’re in New Orleans,” says Campanelli of the band’s free-wheeling show, which is filled with audience interaction and improvisation. “Wherever we go, we bring that vibe, spirit, energy, and looseness to the room that wasn’t there the night before. We played a show in St. Louis and people lost their minds dancing. Afterward, they told us, ‘Wow, people don’t dance in St. Louis.’ That’s what we bring. We make a Tuesday night in your town feel like New Orleans on a Saturday night.”

The seeds of The Revivalists were planted in 2007 when Feinberg, out riding his bike, came across Shaw sitting on his front porch belting an original song called “Purple Heart” (which wound up on The Revivalists debut album Vital Signs). Shaw had moved to New Orleans two weeks prior for its rich musical history and because he had heard the city was in need of construction workers to help rebuild the city after Hurricane Katrina. (He had just graduated from Ohio State with a degree in construction management.) Feinberg had also moved to New Orleans for the music scene and to study psychology at Tulane University. He had only been in the dorms for an hour when everyone was forced to evacuate due to the impending hurricane. That day in August 2007, Feinberg and Shaw struck up a conversation and instantly began to jam and collaborate, establishing an immediate musical connection and friendship. Within weeks they had invited Campanelli, whom Feinberg had met through workshops at New Orleans music venue Tipitina’s, to join them. Rounding out the band’s line-up is Ingraham, Gekas, and Girardot, whom Feinberg and Campanelli knew from Tulane and Loyola respectively, as well as Williams, whom they all knew from the local music scene.

The Revivalists played clubs like Checkpoint Charlie’s in New Orleans and Bamboo Willie’s in Pensacola, which Shaw equates to The Beatles’ “Hamburg Years,” because of the epically long shows. “We played four to five hours a night and didn’t have that much material, so we had to stretch and find ways to engage the crowd,” he says. “We made it our mission to grab every single person’s attention, which is what happened. By the end of the first set, everyone who had been standing at the bar would be standing at the front of the stage. That’s when I started to realize we had something special.”

They called themselves The Revivalists, which felt fitting given what the city was going through two years after the devastation of Katrina. “New Orleans was finally starting to rebound, and seeing it get back on its feet at the same time that this band, which respects older styles of music, was getting together, it just felt right as a name,” says Feinberg. “It’s about the excitement of this great American city, this great musical city, coming back to life.”