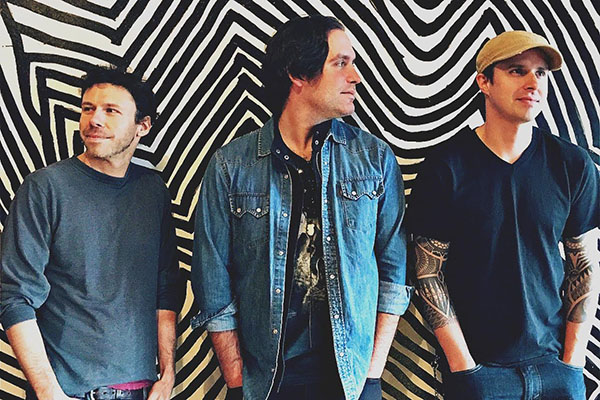 Clearly, the guys in WOLF! feel they have nothing to prove. “And that’s why WOLF! doesn’t sound like anything else,” 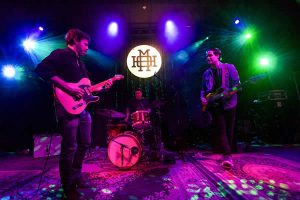 You’re at a nightclub one night a few years ago—the Lovin’ Cup in Brooklyn’s Williamsburg neighborhood, to be exact. Your favorite local singer is on the bill, so you got there early and grabbed the best table. You wait for the gig to start…You wait a little longer…

The singer’s backup band—guitarist Scott Metzger, bassist Jon Shaw and drummer Taylor Floreth—file onto the stage. Then comes the announcement: The singer never showed up, so tonight it’s going to be instrumental music only. Oh, and all of it’s going to be made up on the spot since none of these guys thought they’d be performing on their own. In fact, they never even thought of themselves as a band at all.

What do you do? Well, you might get annoyed, give up your seat and stomp out into the night — which would have been a big mistake. Or you might stay where you are, curious about what could happen, and witness the birth of one of the most innovative ensembles in music today.

This trio is known now as WOLF! In some ways, they’re still doing what they did that night at the Lovin’ Cup—creating music on the spot, though now in front of audiences that stay put because they know they’re in for a few hours of daring, evocative and unpredictable performance. And, yes, they’re still working without singers.

What has changed over these past few years is that their telepathy with each other has strengthened, their horizons have dramatically stretched…and they’re about to release one of the most compelling albums by any band in recent times.

1-800-WOLF! represents everything that eludes chest-thumping power trios and even many small jazz ensembles. Nobody shows off. There are no fireworks, no screaming solos. In their place, the music of WOLF! overflows with atmosphere—a wisp of Parisian swing in “Oaxaca Ox,” a dreamy seaside mist in “Bohemian Grove,” a Tarantino moonlight spell on “Furry Freedom,” a creamy, gorgeous texture on “Denim Love Affair,” where Metzger’s solo, as always unadorned by effects, is so spare it’s almost not there. And on every track, silences speak as eloquently as the notes they surround.

Clearly, the guys in WOLF! feel they have nothing to prove. “And that’s why WOLF! doesn’t sound like anything else,” Metzger agrees. “Some guys get up onstage and just play what they’ve been practicing. We’re the complete opposite of that. We play what serves the song.”

Who exactly are the well-matched members of WOLF!? First of all, they’re all Brooklyn natives, an important point by Metzger’s measure. “In Brooklyn, you’ve got some of the best in the world playing pretty much any genre you can imagine,” he says. “The bar is high here. Nobody wants to hear your flashiest shit. Nobody’s going to be impressed. If you’re going to play a solo, you’d better really say something. Otherwise, nobody cares because everybody here has heard it all.”

Just as important, all three broke into music as sidemen — professional musicians rather than wannabe stars. Metzger has performed countless sessions and shows with artists as diverse as Trixie Whitley, Phil Lesh & Friends, Moby and Nicole Atkins, while also holding down lead guitar duties for summer festival favorites, Joe Russo’s Almost Dead. Shaw has anchored the bottom end for Cass McCombs, Shakey Graves and Sharon van Etten among many others. Floreth emerged from New York’s Collective School of Music and has since played shows with blues innovator Bill Sims Jr., guitarists Jim Campilongo and Avi Bortnick and singer/songwriter Kelli Scarr.

As they established themselves as go-to backup players for New York artists, Metzger, Shaw and Floreth inevitably crossed and recrossed paths. As their instincts for playing together grew, they began getting booked as a unit. Still, it never crossed their minds to step out on their own until that fateful night in Williamsburg. At the end of that initial gig, when the club owner offered them a weekly booking as an instrumental three-piece, they finally realized they were onto something good.

Branded with the name WOLF!, they evolved into a unique musical entity — and then kept evolving. “Our early stuff was kind of contained,” Metzger says. “As the years have gone by, we’ve learned to represent more influences. We can introduce a noise aspect or free jazz elements. We’ve become a lot less about guitar solos. In the beginning, we saw the guitar as the voice that was leading us. Now we’re more about creating arrangements on the spot as opposed to melody/solo/melody. I’m not thinking, ‘OK, I’m gonna solo now.’ It’s more like, ‘Let me compose a cool part for where a solo would traditionally go.’”

In 2015, Royal Potato Family released WOLF!’s self-titled debut. This year they follow with 1-800-WOLF!, featuring tracks recorded in one afternoon at Marco Benevento’s studio in Woodstock and the rest over three days at The Creamery Studio in Brooklyn. Each song was written in true WOLF! fashion, before audiences at gigs, with the exceptions of “Furry Freedom,” was was improvised and recorded in one take at the studio, and “You’re No Longer My Friend, My Friend,” a Buddy-Holly-Meets-Pulp-Fiction composition that Metzger admits to writing after watching an old kung-fu film titled Lady Snowblood.

The point here is that WOLF! is not afraid to acknowledge its influences, from an echo of The Ventures on “Furry Freedom” to old-school electric blues with an actual guitar solo on “All Dressed Up (Nowhere to Go).” Yet there isn’t a derivative moment on the record. Instead, the trio’s antecedents enhance the distinctive sound they continue to build together.

“To be honest, we’re trying to sound more like our influences than what actually ends up coming out,” Metzger says. “It just always comes out sounding like the three of us.”

As 1-800-WOLF! proves and as the band’s upcoming plans to tour will demonstrate in venues throughout America, WOLF! stands alone even among innovative artists in its dedication to conjuring moments of unique and edgy beauty.

“It takes a lot of guts to get up each night and not know what’s going to happen,” Metzger concludes. “Each night we play is completely different from every other night. I think it comes down to musical confidence and trust. The fact is, we can do whatever we want with this thing. And we’re just getting started.”