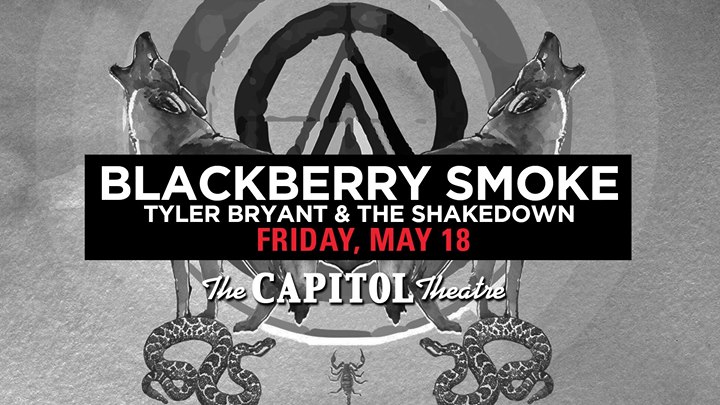 18 & over unless accompanied by a parent or legal guardian

Blackberry Smoke has never been a band that stands still. Whether pursuing the dream by logging hundreds of thousands of miles on America’s highways and abroad or relentlessly exploring the many facets of its most unique art form, the Atlanta quintet is always on the move.

The songs on Blackberry Smoke’s sixth album, Like an Arrow show just how far this authentic American rock band has come as the accomplished group of musicians tackles a diverse set of new ideas, sounds and territories, long after most bands with half the success might have settled into a well-worn groove.

“We’re all likeminded in that we all want to explore,” singer and principal songwriter Charlie Starr said. “There’s just no way we could make the same record over and over again, though there are some fans who would like us to. That’s just way too formulaic. If the Beatles or Led Zeppelin did that, we wouldn’t love them as much.”

Like An Arrow continues the trend of sonic exploration established on the Blackberry Smoke’s previous two releases, 2012’s The Whippoorwill and 2015’s chart-topping Holding All the Roses. It kicks off with the band’s heaviest song to date and explores British rock before moving on to musical stops in places like Macon, Woodstock, Muscle Shoals and Tulsa as Starr and his buddies follow the ramblin’ examples of timeless, authentic acts like The Allman Brothers Band, JJ Cale, The Band and others who define rock ‘n’ roll in all its many facets.

“We just want the sound of the band to continue to grow and broaden. We’re not trying to make a hip-hop record,” Starr said with a laugh. “But there’s so many elements to what people call rock. There’s gospel and country and swing and blues. We’re just trying to write songs that include all those different types of elements. It keeps it interesting for musicians and songwriters. You think, ‘Well, I don’t have a straitjacket on, I haven’t painted myself into a corner, so I can try and just make the most of this art form.’”

Holding All the Roses, produced by Grammy Award winner Brendan O’Brien, debuted at No. 1 on the Billboard Country Albums chart and No. 7 on the Rock Albums chart, proof of the band’s universality. Praised by fellow artists as diverse as Dierks Bentley and ZZ Top’s Billy Gibbons, Blackberry Smoke now delivers an album that should invite even more fans under its revival tent.

Produced by the band with O’Brien’s engineer Billy Bowers handling the recording, Like An Arrow sounds and feels exactly how the band wanted it to.

“I think that it pleasantly surprised everybody involved,” Starr said. “Not that I think working with a producer is a bad thing because it’s a very good thing. But sometimes you just go with your gut and my gut told me, ‘Let’s make this record.’ We stretched out on some songs, of course, and obviously the record is a bit more hi-fi than my homemade demos. But it really was going back to let’s get in a room and play the music.”

Like An Arrow leads off with “Waiting For The Thunder,” a song driven by dark images, towering guitars and Still’s storm-driven B3 Hammond organ. Starr says the song sets the tone for where the album lives.

“It’s dynamic and big, it’s exciting,” Starr said. “When we recorded it, from the very beginning, I felt like this was going to be the song that would lead off the record because it sort of stands alone as far as the level of excitement that the song throws at you, just right off the bat.”

The band continues its exploration of amped-up territory on the title track, a psychedelic blast of heavy metal transcendentalism.

“There are some songs that are heavier than anything we’ve ever recorded – it’s a far cry,” Starr said. “’Like An Arrow’ is the closest thing to Black Sabbath that I think we’ve ever recorded in a way. I think it surprised everybody when we pressed record and started to play it. We were like, ‘Oh, my God, this thing is massive.’”

Blackberry Smoke heads hard in the other direction, too, backing off the four-on-the-floor for different textures. “Believe You Me,” for instance, is a disco-tinged, bottom-heavy blast of country funk.

“It is one of the handful of departures on the record,” Starr said. “’Waiting For The Thunder’ or ‘Like An Arrow’ might place the album in a certain genre – whichever box might make you feel comfortable – and ‘Believe You Me’ will come along and shake up the norm. It’s not what I would consider formulaic.”

“Sunrise In Texas,” a Michael Tolcher song that’s been a fixture in Blackberry Smoke’s live set for a decade, finally makes it onto album here, also because of its uniqueness. The song opens with dobro and electric piano before building to a long-form crescendo that lets the band show off its well-honed musicianship. “Running Through Time,” written with friend Travis Meadows, takes a look at life through the eyes of an old man looking back at the struggles of his youth on a song that’s carried along on an airy, lilting guitar line like nothing else the band’s recorded.

“We both led wild lives throughout our 20s and some of our 30s, doing similar types of bad things,” Starr said. “And we laugh about it now. And so we were talking about writing a song about that idea: Who he is now and what he might have learned – and maybe what he didn’t. The yin and the yang of the young and old man. That’s the trippy one. That’s the mushroom song. Like JJ Cale recording in Muscle Shoals.”

Gregg Allman joins the band on “Free On The Wing,” a song that brings it all back home after the musical journey.

“That’s a very Macon, Georgia, kinda song,” Starr said. “To me that type of song just embodies the whole Southern rock idea to me. Because it sounds like it came out of the river, out of the Chattahoochee, out of the Southeastern United States where we all grew up. And to have Gregg Allman sing on it perfectly completes it.”