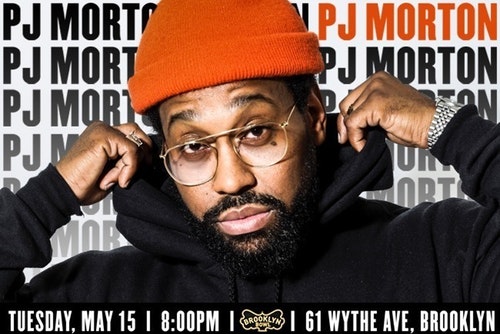 PJ Morton is a GRAMMY, Stellar & Dove Award-winning singer, songwriter, producer, & multi-instrumentalist & Maroon 5 keyboardist.
In addition to boasting collaborations with Adam Levine, Lil Wayne, & Busta Rhymes, his critically acclaimed 2013 offering, New Orleans, earned a 2014 GRAMMY® Award nomination in the category of “Best R&B Song” for “Only One” [feat. Stevie Wonder]. In addition to figuring prominently on Maroon 5’s multiplatinum Overexposedand V, Morton has written and produced for everybody from BJ The Chicago Kid, Jermaine Dupri, and Jazmine Sullivan to Monica and India.Arie.

Among many other accolades, he has published his literary debut Why Can’t I Sing About Love? in 2009, and become music director for Solange following the release of her critically acclaimed opus A Seat At The Table.

In April 2017, he released his 5th studio album & first offering for his own Morton Records, Gumbo from the funkified grooves of “Claustrophobic” [feat. Pell] to the unifying and undeniable message of “Everything’s Gonna Be Alright” [feat. BJ The Chicago Kid & The Hamiltones]. In 2018, this album was Grammy nominated for Best R&B Album and his single, First Began was nominated for Best R&B Song.