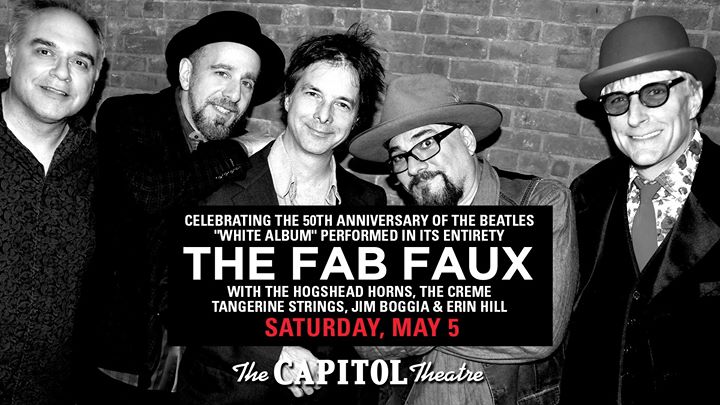 This event is 18 and over
This event will have a reserved seated Orchestra, Loge, and Balcony. Standing room is in the rear of the orchestra behind the last row of seats.

With a commitment to the accurate reproduction of The Beatles’ repertoire, The Fab Faux treat the seminal music with unwavering respect, and are known for their painstaking recreations of the songs (with emphasis on the later works never performed live by the Beatles). Far beyond a cover band, they play the music of The Beatles so impeccably that one must experience it to believe it. Imagine hearing complex material like “Strawberry Fields Forever” or “I Am the Walrus” performed in complete part-perfect renditions; or such harmony-driven songs as “Because”, “Nowhere Man”, and “Paperback Writer”, eproduced not only note-for-note, but with extra vocalists to achieve a double-tracked effect.

The musical virtuosity of The Fab Faux – in actuality five of the hardest working musicians in NYC – completely up-ends the concept of a Beatles tribute band. Far beyond being extended sets of cover versions, their astounding shows are an inspired re-discovery of the Beatles’ musical magic, as The Fab Faux tackles the group’s most demanding material live onstage in a way that has to be experienced to be believed.

Calling them, “the greatest Beatles cover band – without the wigs,” Rolling Stone senior editor David Fricke wrote, “the Faux invigorate the artistry of even the Beatles’ most intricate studio masterpieces with top chops and Beatlemaniac glee.” Approaching the songs with the intent of playing them live as accurately in musical reading and in spirit as possible, The Faux’s breathtaking performances tend to dispel all concert goers’ previous notions of a Beatles tribute act. “The Fab Faux have the hardest job in the history of R & R and they pull it off damn well. All rock bands want to be like the Beatles; these guys have the nerve to BE the Beatles. Amazingly, they’re so good at it you learn new things about the originals” – Dave Marsh, legendary Rock Critic and Sirius Radio Host.

The Fab Faux are a labor of love that was born in 1998 when neighbors Jimmy Vivino, Music Director/Guitarist for The Tonight Show with Conan O’Brien and long time music partner of Levon Helm, John Sebastian, Laura Nyro and Max Weinberg (to name a few), and Will Lee (who’s played with all 4 Beatles), bassist for Paul Shaffer’s CBS Orchestra on the Late Show With David Letterman kicked around the idea during an elevator ride in their NYC building. Rounding out the line-up are lead-singing drummer/producer Rich Pagano (Rosanne Cash, Patti Smith, Ray Davies, etc.), guitarist Frank Agnello (Marshall Crenshaw, Phoebe Snow, etc.) and ace keyboardist/guitarist Jack Petruzzelli (Rufus Wainwright, Patti Smith, Joan Osborne Band, etc.). All five principals contribute vocals, making the Faux’s soaring harmonies as resonant as their multi-instrumental chops, which are further enhanced by the four-piece Hogshead Horns (with Blues Brothers, Blood, Sweat & Tears and SNL band alums) and Creme Tangerine Strings.

The Faux’s high energy shows have generated serious buzz not only at top NYC venues including sold out shows at Radio City Music Hall, The Beacon Theater, Hammerstein Ballroom, and Webster Hall – with Beatles fans, movie stars and world class musicians in attendance – but at major dates in Los Angeles, Atlanta, Las Vegas, Park City, Utah (Sundance), Philadelphia, Boston, Chicago and Toronto, among other locales. They’ve headlined 4 of the last 5 years at Liverpool’s annual Beatle Week, playing before 35,000 Beatle fanatics – while in England, they had the rare honor of recording an original song at Abbey Road Studios – and also delighted the masses performing live on the Howard Stern Show and The Mark And Brian Show. Benefit and corporate dates have included events for JVC, the N.B.A. and the Michael J. Fox Parkinsons Research Foundation. TV appearances include Late Show with David Letterman and Late Night with Conan O’Brien.

“It’s not just a cover band,” says the Faux’s Pagano. “This is the greatest Pop music ever written, and we’re such freaks for it…Vivino adds, “It’s constant archaeology.” Imagine the instrumental complexities of “Strawberry Fields Forever” and “A Day in the Life” performed part-perfect with an orchestra. The lush, multi-layered harmonies of “Because,” and “Eleanor Rigby” sung note-for-note. The adrenaline rush of “Helter Skelter” and “Paperback Writer,” delivered spot on… “Whenever anyone saw The Beatles perform it was just the four guys,” Lee continues. “You never saw them on stage with a sitar or a string section. We have all that stuff.”