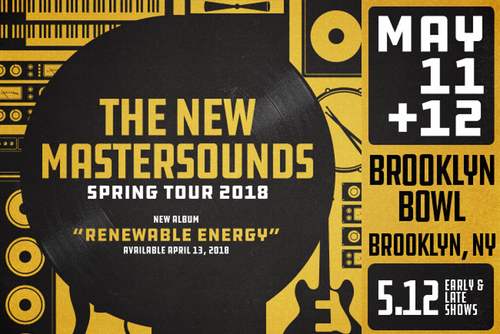 The New Mastersounds formed in Leeds UK in 1999 and cut their teeth as the resident live band at a hip dance club, playing every Friday and Saturday night for nearly two years.
A rough 8-track recording of an early rehearsal got into the hands of some London DJs, and was released soon after on two limited-edition 7” singles. Invitations to play club gigs in London soon followed, and before long the band had established a reputation around UK and Europe as forerunners of the deep funk revival scene. Fast-forward to 2004: having experimented with various line-ups and recorded 2 albums, the original 4-piece band was invited to Chicago to open for the Greyboy All Stars at the House of Blues. This gig kicked off a prolific live career in USA which continues to the present day, backed up by more studio records, live albums, a remix album and 2 compilations. Their quirky, catchy instrumental ditties have been used on TV and film soundtracks, and the band is the subject of an award-winning feature-length documentary: “Coals to Newcastle: The New Mastersounds – from Leeds to New Orleans”.

The band tours in support of the latest studio record, “Made For Pleasure”, released Fall 2015.