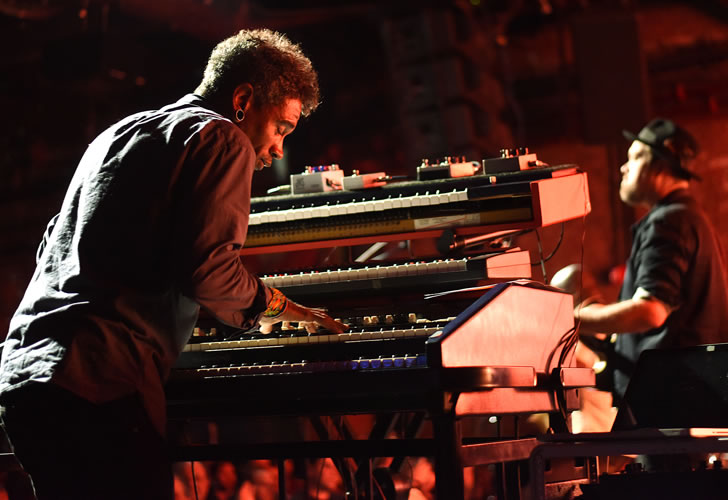 The rapidly shifting landscape of the modern-day music business has given Soulive the opportunity to take such an unconventional approach to releasing music.

Soulive has never made any bones about what they do best; it’s right there in their name. Since forming in 1999, the trio of guitarist Eric Krasno, drummer Alan Evans and keyboardist Neal Evans has carried the torch for the soul-jazz organ trio—that venerable, funky institution pioneered by the likes of Jimmy Smith, Brother Jack McDuff and Groove Holmes Jimmy Smith in the late ’60s. Rest assured, when the Evans brothers first brought Kraz by their Woodstock studio, there was plenty of old vinyl spread out on the floor.

There’s no telling what you’ll see when you press “Play” on the long-awaited new EP from genre-smashing groove masters Soulive, but these five dynamic new tunes are guaranteed to turn the backs of your eyelids into a vibrant, action-packed movie screen. With Cinematics Vol. 1, the band transforms their infectious blend of soul-jazz, hip-hop, R&B, funk and rock into a series of soundtracks for the movies of your mind. Better yet, this initial volume is the first in a planned series of Cinematics EPs. With six long years having passed since the last time the three members of Soulive entered a studio together, fans will no doubt be excited to learn that there’s plenty of new music expected from guitarist Eric Krasno, drummer Alan Evans and keyboardist Neal Evans for the foreseeable future.

All three members have kept quite busy in their time apart from Soulive. Alan Evans runs his own studio Iron Wax in Western Massachusetts, while touring with Matador! Soul Sounds, a band that he formed with guitarist Eddie Roberts from The New Mastersounds. Eric Krasno released a critically acclaimed solo album, Blood From A Stone, in 2016 and produced records for Aaron Neville, London Souls and Marcus King among others. Neal Evans has worked on film and television scores, as well as being an in-demand keyboardist both in the studio and on the road for a number of high profile artists. Despite the time apart pursuing individual endeavors, when the band reconvened in Al Evans’ Iron Wax studios in late 2017, they quickly gelled, calling upon the thousands of hours they’ve spent playing music together since Soulive’s inception in 1999.  Arriving without any overarching concept in mind, they each brought a few loosely-sketched ideas and fleshed them out together.

“We trust each other to bring our voices to each other’s ideas,” says Alan, while Krasno adds, “I think Soulive creates our best material using that method.”

The “cinematic” quality of the music, then, arose naturally from the trio’s collective instincts rather than from some grand plan. But it’s unmistakably present throughout the session, conjuring imaginary sequences that take the trademark Soulive sound in thrilling new directions.

Now that they’ve ventured down that path, of course, it remains for listeners to follow in their footsteps. That journey begins with the entrancing psychedelic soul of “Kings March,” which brims with the suspense and seduction of a vintage spy thriller. The laid-back “Bluebird” perfectly conveys the happiness traditionally associated with the titular bird, suggesting the freedom and possibility of a classic road movie. The band’s knack for vivacious funk comes to the fore on “Sidekick,” perhaps the theme for a supporting character out on their own spectacular adventures. “Millers Last Stand,” with its exotic, Ennio Morricone-esque flavor, finds Soulive venturing into spaghetti western territory, imagining a gunfight in the quaint New England town of Millers Falls, Massachusetts, where Alan’s studio is based. The EP closes with the surf guitar cool of “Waves,” so befitting a beach movie that you can virtually feel the wind rustling your hair.

“A cinematic piece of music creates a mood. Film composers like Jerry Goldsmith, David Axelrod, Ennio Morricone and Melvin Van Peebles were all influential on the writing and recording process,” Krasno says.

Cinematics Vol. 1 does just that, and with that umbrella title now established the trio will get back together over the coming year with the idea of Silver Screen serenades to guide them.

“It’s a really fun concept to mess around with,” Alan says. “But the exciting thing about it is that we have no idea what the next ones will sound like. In a few months our head-spaces are going to be somewhere different, the sound of the room is going to be different just because of the ambient temperature – all of these factors are going to change the sound of the next recording and the one after that. I’m psyched to come back with some totally different influences and see what that will sound like.”

The rapidly shifting landscape of the modern-day music business has given Soulive the opportunity to take such an unconventional approach to releasing music, offering fans a few tracks at a time as inspiration strikes.

“One of the advantages of putting out music in 2018 is that we can do it quickly and on our own schedule,” Krasno says. “We made this record top to bottom in two days and put it out about a month later, while it’s still fresh from being created.”

Alan adds, “You can work at the speed of your own creativity these days. That gives us a lot of freedom. The music can happen when it wants to happen, and whenever it does it’s going to be a lot of fun.”

In their 20 years together, Soulive has followed the muse in the direction of hip-hop, R&B, blues and rock, collaborating with the likes of Chaka Khan, Dave Matthews, Talib Kweli, John Scofield, Derek Trucks, Maceo Parker, Susan Tedeschi, Robert Randolph, Joshua Redman, Kenny Garrett, Fred Wesley, The Roots, Ivan Neville and so many others, even going so far as to record a full album of covers by The Beatles (Rubber Soulive). But, no matter how they push the limits of the organ trio, they always come back to their bread and butter: blistering solos and grooves that don’t quit.