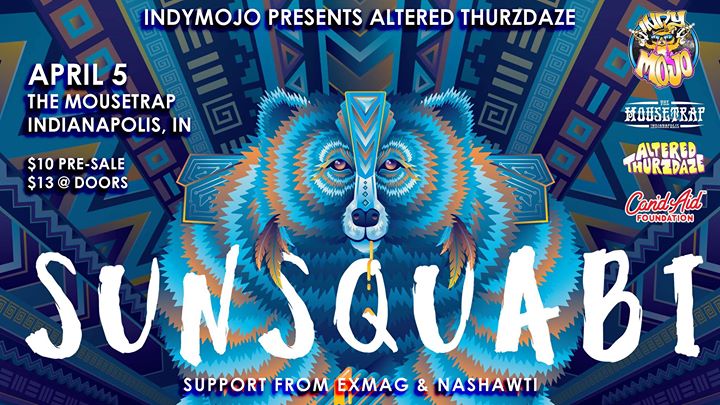 IndyMojo Presents is excited to bring you this very special edition of your favorite night of the week…..

A three-piece suit, live electronic experience. Hailing from Colorado, SunSquabi has been picking up steam after a breakout year in 2016, marked by their debut release on GRiZ’s All Good Records. The bands 7-track EP “Odyssey” takes listeners through a laidback electronic, funk fueled journey. Joining the band on their latest EP, Big Gigantic & GRiZ himself lend their talents to the project. Continuing to shatter expectations of what a “Live-Electronic” band should be, SunSquabi effortlessly transitions between synth-bass heavy vibes to smooth jam-like grooves.

SunSquabi spent the better part of 2016 touring across North America making debut appearances and show stealing performances at festivals including… Electric Forest, High Sierra, Camp Bisco, Hulaween & more! The live-electronic trio is gearing up for their biggest year yet, including stops at Red Rocks, Brooklyn Bowl Las Vegas and their largest headline tour to date!

2017 will see SunSquabi’s second release on All Good Records, The “Deluxe” EP, out later this Spring. “Pygmy Up” the lead single featuring Russ Liquid was released at the top of year, followed by “Cinnamon” with Late Night Radio. Look out for the “Deluxe” EP to pick up where “Odyssey” left off and continue to solidify the SunSquabi sound.

$1 of each ticket will go to Can’d Aid Foundation
http://candaid.org

Hosted by:
The Mousetrap
http://www.themousetrapbar.com