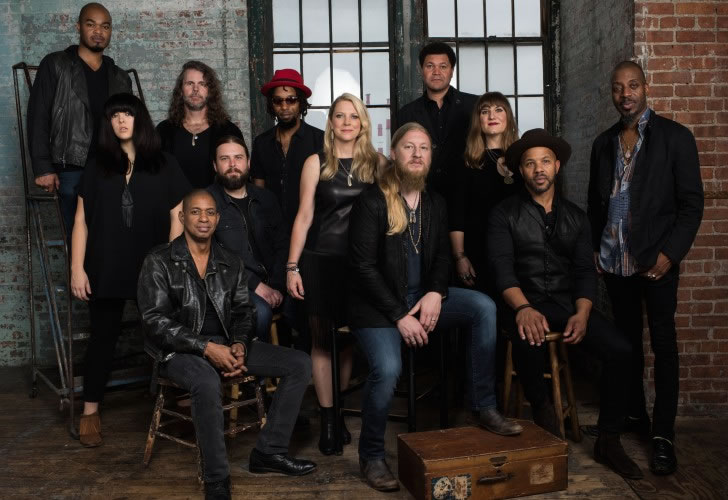 “Freedom is another word,” so the song went back in an easier and less costly time, “for nothing left to lose.” Freedom—the kind that Tedeschi Trucks Band has created for...

“Freedom is another word,” so the song went back in an easier and less costly time, “for nothing left to lose.” Freedom—the kind that Tedeschi Trucks Band has created for themselves since their inception in 2010—has come at a much higher price and required a deeper sense of dedication. It’s the kind of freedom that has allowed them to keep a band that has grown to more than a dozen musicians and crew on the road for five years, garnering an ever-increasing international audience, while developing a musical identity that has yielded original, award-winning recordings.

Let Me Get By is the third and latest studio album by the TTB, featuring ten new, original songs that together stand as a testament to the hard work, independent spirit, and now full-on commitment of the husband-and-wife team of Derek Trucks and Susan Tedeschi, plus the musicians and music professionals who are part of the band’s ongoing journey. The album’s artwork—a Mongolian golden eagle caught a moment after flying from its master’s glove—and even the album title, reflect the sense of total dedication that serves as the driving wheel of TTB.

“’Let Me Get By’ actually refers to a lot of things,” says Trucks, “like the band becoming more self-reliant than ever before—writing our own songs and producing our own music in our own studio. It’s about moving on to a new recording label with a deal that gives us more freedom, and personally, I found myself with more time to focus on TTB after the Allman Brothers played their final shows this past year.

“It definitely took time for us to get here. I think the connections we have in this band and among the crew and extended family are the real reason why. I look around the stage every night and am just in awe of the situation—the music’s amazing and road-tested and we all really like each other. That’s what I hear in the music on this new album—this feeling that we’re now putting 100% of what we have into this band, not going back to anything else, not having anywhere else to go.”

The TTB journey began on April 1, 2010 with their first gig at the Savannah Music Festival, and led to the recording and release of their Grammy-winning debut album Revelator in 2011, and Made Up Mind two years later. During their five-year rise, the group toured incessantly, raising their profile and being handpicked to play with the likes of Eric Clapton, Bob Dylan, and Santana; to appear on television shows hosted by Jay Leno, Conan, and on the premiere of Stephen Colbert’s The Late Show; and hosting special all-star musical salutes themselves, including Bonnaroo’s Superjam in 2014 (with Chaka Khan, Anthony Hamilton, Taj Mahal, and others), and Lock’n Festival’s Tribute to Joe Cocker’s Mad Dogs & Englishmen in 2015 (with Leon Russell, Rita Coolidge, and many other original members.)

What began as an eight-piece group has now expanded to an onstage lineup of twelve musicians—a lineup that has remained unusually consistent. In 2015, for the fifth straight year, they were on the road for more than 200 days, and sold more tickets than ever before. Swamp Raga, the recording studio that Trucks and Tedeschi built from scratch next to their house, has been expanded and updated to the point that no other facilities are required. Bobby Tis, the band’s longtime, on-the-road monitor engineer has become their full-time studio engineer; Trucks himself now serves as sole producer. All tracks on Let Me Get By, to be released on January 29, 2016, are credited to Trucks, with three songs co-produced by guitarist and longtime collaborator Doyle Bramhall II.

“Derek hears everything from a big picture stance,” says his wife and band co-leader, singer/guitarist Susan Tedeschi. “Not just track by track but the album as a whole. What needs to be added, when a song is done, and he really knows how to get the best out of each player. On this album I feel like I was personally produced with more direction than I ever have. He instinctively knew when I could sing a better take, and would have a suggestion or two, and that really brought the best out of me.”

Let Me Get By is the culmination of an exceptionally busy year for TTB. The music on the album in fact, as guitarist and bandleader Trucks remembers, was born during tour rehearsals in their hometown of Jacksonville, Florida in January with an impromptu idea played by the band’s keyboardist. “The song ‘Let Me Get By” started at sound check one day, Kofi [Burbridge] playing that riff and then we took it into the studio and [singer] Mike Mattison and Sue went upstairs and the lyrics just poured out. It’s a bunch of different true stories meshed into one.”

Like the group’s other recordings, Let Me Get By benefits from a number of musical elements that have become TTB trademarks: their deep sense of American roots music: rock, blues, soul, and especially gospel. Their balance of easy-flowing song structures and soaring, improvisational sections. Tedeschi’s spiritually charged vocals, and Trucks’s wide range of guitar tones slide and picked, from back-alley, distorted rawness to Indian sitar-like sinuousness.

There are a number of characteristics that differentiate the music on this new album. One is a clearer, more mature musical identity that comes through a generous array of musical moods and feels. Tedeschi credits it to the inside familiarity among the group’s members: “the album didn’t come from any outside influence. This is the first time it’s all in-house, so I feel it’s really a good look at the actual band in action, how we communicate together.” Trucks agrees, adding that “the band is in a better place than it’s ever been that way. When everybody would be in the room anyone could just throw out ideas and everybody’d be willing to listen. You have to really trust each other and not be afraid of getting your feelings hurt. That’s more how it was at the beginning but now it’s a fun process, with everyone contributing.”

Another growth ring is a sense of expansion to TTB’s sonic signature. There’s an increased focus on Tedeschi’s powerful guitar playing (especially on “Don’t Know What It Means,” in which she solos powerfully before her husband’s guitar statement. As well, the album features the first lead vocals on a TTB album by Mike Mattison (on “Crying Over You” and “Right On Time”), whose mastery as a lyricist and songwriter has always been a central part of the TTB sound.

For Trucks, Let Me Get By is concrete evidence that the band is on the right track, and that more singular music will continue to flow from the expansive yet tightly connected musical family TTB has become. “There’s a lot of sacrifice that goes into a band like this and the fact that everybody’s on board musically, hearts and minds, makes it very humbling. There are nights on stage when I think I don’t know if it’s ever been more fun to be in a band and be on the road and be alive than it is right now with a group like this. For me, that’s the joy and the thankfulness that comes across in Let Me Get By.

“Susan and I take that seriously and at the same time, Susan started a kind of joke about it. After shows, she started to say to everyone, ‘Thanks for letting me be in your band’ and we’d all laugh. Now we all say it.”