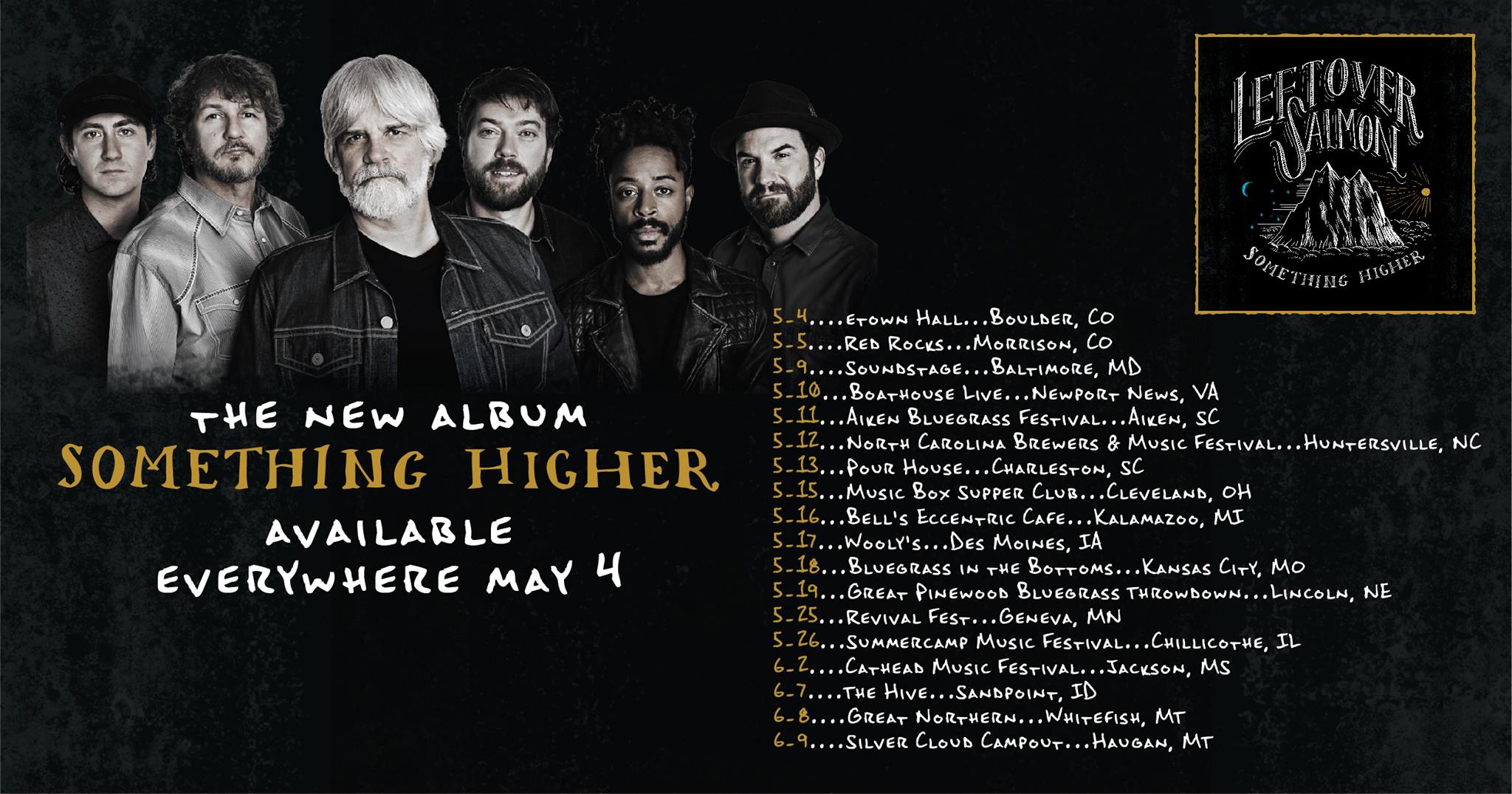 Join Leftover Salmon for their Intimate Album Release Party for their new album “Something Higher” on Monday, May 7th at The Bowery Electric. 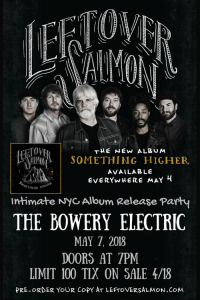 For any band to thrive on the road for nearly thirty years, there needs to be a constant source of renewal, a fresh spring of creativity at the center of the music that brings each member back for more. For Leftover Salmon, one of the great purveyors of Americana, this source came first from the American roots music traditions they came up with: bluegrass picking, Cajun two-stepping, the country blues. For all these years–over the course of their rise to become one of the biggest bands on the roots music circuit today, with legions of fans and routinely sold-out shows–Leftover Salmon have picked up many more influences. Much of this comes from the interactions between the founding members’ roots and the newer band members, who bring refreshingly different influences and ideas to the songwriting process. With their new album, ​”​Something Higher,​”​ due out May 4, 2018 on LoS Records, Leftover Salmon taps into everything from horn-blasting R&B to reverb-drenched desert noir, from the cosmic roots music sound they helped create to neo-New Orleans-meets-Appalachia liquefaction. There’s an unmistakable evolution to Leftover Salmon’s sound, and Something Higher has an edge to it that feels entirely new.

To create Something Higher, Leftover Salmon returned to long-time producer Steve Berlin (Los Lobos) with a new mission: to record at the famed Wavelab Studio in Tucson, Arizona, and to go all analog. The warmth of analog, coupled with Berlin’s uncommonly attuned ear for the dynamics of larger bands, brought a more focused sound to the group and challenged them as well. “He’s always looking for that thing in a song or a groove that he hasn’t heard before,” says bassist Greg Garrison about Berlin, “which is tricky because he’s heard a lot of stuff already! He pushes the band to do something different, to surprise him.” Over 10 days in Tucson, Leftover Salmon laid out the new music, each songwriter bringing a songwriting kernel and letting the rest of the band work out new improvisations to craft the final song. The key to Leftover Salmon’s music, now more than ever, is the way they marry technical precision with easy groove. It’s a trick that old jazz players used to pull, a dance between virtuosity and the illusion of ease. In crafting the new music, founding members Vince Herman and Drew Emmitt provide a foundational focus and guiding spirit, while banjo player Andy Thorn keeps the band close to their original roots in backstage picking parties. The rhythm section–bassist ​Greg ​Garrison, keyboardist Erik Deutsch, and drummer Alwyn Robinson– was a key focus point for Berlin, who drew out members’ backgrounds in jazz and hip-hop to zero in on the heart of Leftover Salmon: the groove.

For the past quarter-century, Leftover Salmon has established itself as key to the Americana genre, digging deep into the well that supplies its influences; rock ‘n’ roll, folk, bluegrass, Cajun, soul, zydeco, jazz and blues. They are the direct descendants of bands like Little Feat, New Grass Revival, Grateful Dead and The Band, born of the heart and soul of America itself, playing music that reflects the sounds emanating from the Appalachian hills, the streets of New Orleans, the clubs of Chicago, the plains of Texas, and the mountains of Colorado. They’ve endured over all these years, earning their unequivocal stature as a truly legendary band.

Click here for tickets to An Evening With Leftover Salmon – Intimate Album Release Party. A 100 person event at The Bowery Electric Monday May 7th. Tickets on sale right now!

Pre-order your copy of “Something Higher” here.