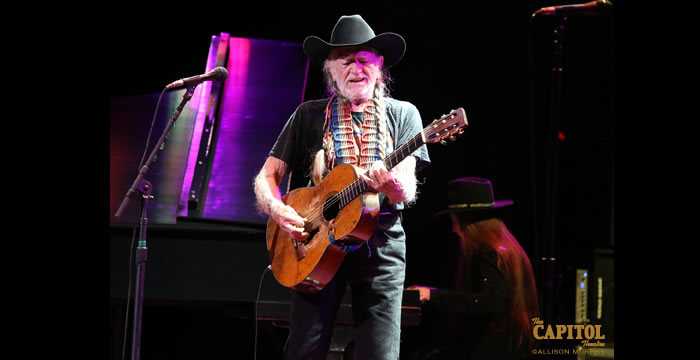 Willie Nelson will turn 85 years old this year on April 29th, which is only two days after the release of his latest album, ‘Last Man Standing.‘ With a title track that clearly acknowledges the passing of so many musical colleagues and cherished friends who have sadly gone before him, this song looks at the truly double-edged sword that comes from outliving Willie’s peers, loved ones and the album is one of his most personal and introspective albums to-date. ‘Last Man Standing’ acknowledges the transience of time while marveling at the joy, beauty and surprise the world has to offer. This album finds Willie Nelson rolling at a creative peak, writing and singing and playing with the seasoned wit and wisdom that only comes from spending most of your life on the road.

However, in the cleverly biting and buoyant “Me and You,” the latest Willie Nelson track released from his new album, he seems to lament the loss of friends of which he has severed ties amidst political divisiveness as of late. “Me and You” identifies the upside of that uncomfortable situation, transcending friendships while celebrating solidarity, or altogether avoids, those ideological chasms between long time friends.

The follow up to the #1 Country Album God’s Problem Child, Last Man Standing is comprised entirely of songs newly-penned by Willie along with longtime collaborator, pal and producer Buddy Cannon  (who is seen in the video clip for this song with him)giving the song’s title added poignancy. Also ever present is Willie’s trusty, battered guitar,Trigger, as well as, the harmonica of Mickey Raphael, who is consistently an enduring staple of Willie’s musical output for many decades.

Nelson recently announced the lineup for his annual legendary  Picnic  at the Circuit of the Americas outside Austin, Texas. The first 4th of July Picnic was held all the way back in 1973 and the lineup for this year’s concert was announced last week with Sturgill Simpson, The Head and the Heart, Ryan Bingham, Edie Brickell & New Bohemians, Jamestown Revival, the Wild Feathers, Particle Kid, Folk Uke and Margo Price among the headlining acts joining the Red Headed Stranger and his Family Band. There will also once again be a strong presence from Nelson’s own extraordinarily talented family, with son Lukas Nelson & Promise of the Real returning this year, as well as, his granddaughter’s Raelyn Nelson Band.

Willie Nelson’s Outlaw Music Festival Tour is becoming a summertime tradition as well. Elvis Costello, Sturgill Simpson,  Alison Krauss and Old Crow Medicine Showare among the dozens of musicians who will join Nelson during the festival’s upcoming summer 2018 run.  This year, the festival curation shines a light on both icons and fresh faces alike. Brandi Carlile, Nathaniel Rateliff & the Night Sweats, Edie Brickell & New Bohemians, Lukas Nelson & Promise of the Real, the Wild Feathers, JD McPherson and Delta Rae are all slated to join this traveling festival for one or more performances, with each concert offering a rotating lineup of artists.

The Outlaw Music Festival Tour is a summertime package tour that focuses not only on music, but additionally on locally crafted brews as well as focusing on hand picked locally-sourced sustainable food options. This years Outlaw Music Festival Tour kicks off the first leg of its 2018 trek on May 25th. From its launching point in Raleigh, North Carolina, it then cuts a wide swath across the eastern half of the United States, coming to a close (albeit a temporary one as new shows are expected to be added any day now) in the Houston suburbs on July 1st.