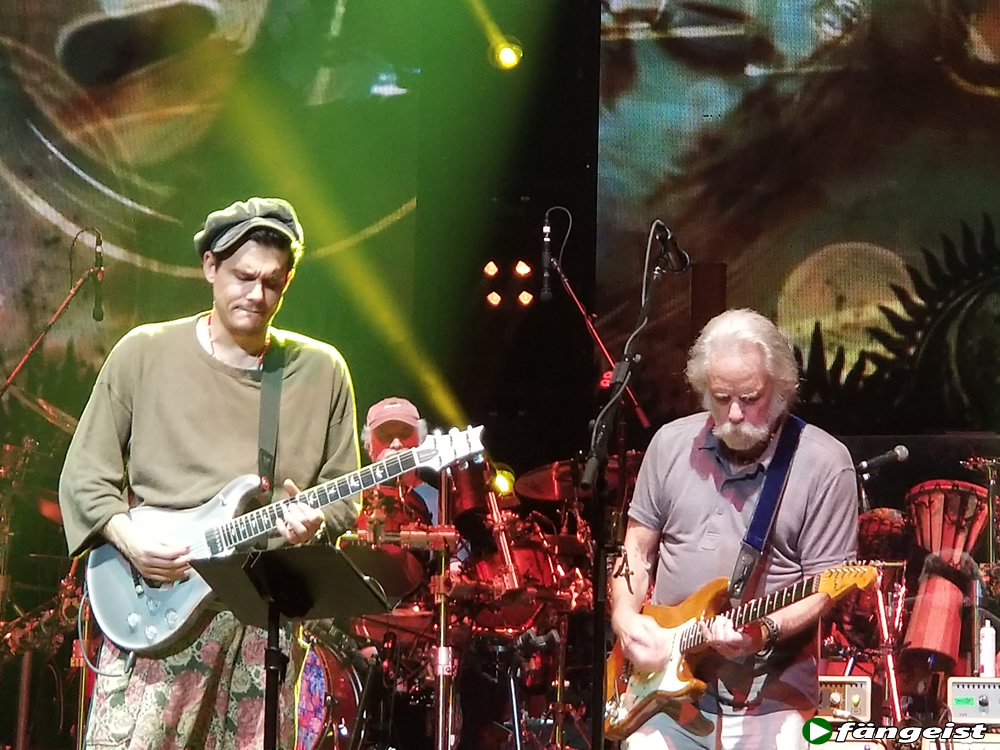 Dead & Company‘s summer tour trucked on to Hartford, Connecticut, on Wednesday night. The six-piece performed at a mid-week, one night stop at the XFINITY Theatre ahead of the band’s huge upcoming two-night stand at the New York Mets stadium in Queens Citi Field this weekend. The venue has a capacity of 30,000 and it appeared that the amphitheater was packed to the gills with deadheads old and young that wanted their chance to see the band in full stride in what is easily becoming their best-performed tour with loads of impressive pieces of improvisation throughout the 9 show run to date with the band interpreting the storied Grateful Dead songbook with unique intent making these songs we have all heard through many incarnations and decades, their own.

From the opening notes in “Hell In A Bucket”, Dead & Company was on point and guitarist, Bob Weir, led a rollicking version of one of the songs he wrote with his recently deceased best friend John Perry Barlow. Weir put extra emphasis on certain lines which allowed for John Mayer to slowly build into his solo on lead guitar by unleashing a string of inventive blistering riffs between each verse.

“Hell In A Bucket”

From there came a John Mayer led “Next Time You See Me”, a blues tune by Junior Parker, marking the band’s first performance of the number on this tour. Dead & Company has used this second song slot in most of their 9 performances to highlight John’s blues-tinged side with an upbeat number which evokes the long-lost spirit of their original keyboardist and Grateful Dead original founder, PigPen. Starting out the show with a blistering blues number vocally and in his guitar work right in Mayer’s wheelhouse and this methodology has allowed each show to be kicked off upbeat and with total confidence with John singing and playing the blues.

“Next Time You See Me”

The crowd-pleasing “Ramble On Rose” came next and was followed up by a stunning version and tour debut of a Bob Weir led Bob Dylan’s “When I Paint My Masterpiece,” which was flawlessly executed by Weir and the darling of the Hartford’s first set. “Cumberland Blues” got the entire crowd of 30,000 Deadheads raging and dancing during this upbeat number which gave Jeff Chimenti a huge platform to shine like the bright light that he has become and he proceeded to rip a long and jazzy solo on the multiple keyboards surrounding him. Oteil’s happy, bouncing, lively bass lines truly stood out during the Hartford “Cumberland Blues.”

I have to give it to Mayer, there are a few songs that he absolutely NAILS as of late and no doubt “Black Muddy River” is one of the standout songs that he has really fallen in love with and has delivered in a similar aching emotional way which Jerry was able to do. “Black Muddy River” is an extraordinarily sad song to me personally and clearly many others in the crowd especially with the knowledge that “Black Muddy River” was the last song Jerry Garcia ever sang live as an encore in his last performance with The Grateful Dead July 9, 1995, in Chicago at Soldier Field. The song’s words are among some of the most touching words in the Dead catalog but the knowledge of the fact that this was Jerry Garcia’s powerful final song he sang to us…makes this a very intense and ultimately very sad song which never got played a ton with the other Grateful Dead offshoots, possibly because no one could pull it off anywhere close to Jerry’s delivery. Mayer is not Jerry; however, he does this storied song justice no doubt. The final song of the first set was the upbeat romp of  “Don’t Ease Me In” which was another tour debut that hasn’t seen the light of day since early Summer Tour of 2016.  “Don’t Ease Me In” was first recorded by Henry Thomas in 1928 and it was one of the original songs which was played in Mother McCree’s Uptown Jug Champions,  the first band Jerry Garcia, Bob Weir and Ron “PigPen” McKernan all played together in Palo Alto circa 1964. The track was originally recorded by Henry Thomas aka Ragtime Texas in 1928. The Grateful Dead played this song during different phases including the first year of their existence. It was also a regular part of their repertoire in 1970, 1972, 1973 and during the 1979 to 1995 period but was absent or rare during other years.

The band took a 35 minute set break and bounded back on stage with a vengeance to rock the second set. After a funky, smooth and highly improvisational set-opener “Feel Like A Stranger” which included some killer Rhodes work by the musical director, Jeff Chimenti which got pretty far out there on the exploratory side of things.

Dead & Company then brought out the MUCH LOVED second “Viola Lee Blues” of the tour.  Dead & Company played “Viola” straight through in Noblesville, IN earlier in the tour; however, the band had something special prepared for the Hartford crowd,  this time around they split the tune into multiple sections/verses before transitioning into the  crowd-pleasing and familiar “China Cat Sunflower.” A noticeably exquisite transition led in “China Cat” into the “I Know You Rider” sequence which was highlighted by a knock-your-socks-off, I never heard a solo there but it sounds AWESOME killer guitar solo driven by John Mayer and the tone of his brand new sleek silver custom-made PRS Silver Sky John Mayer signature guitar that he had made for this tour, which I have noticed time and time again hits the mark when it comes to tone for lead guitar work on Grateful Dead material.

The show rolled on with the band laying out a tight rendition of the tour debut “Man Smart, Woman Smarter.”  Bill Kreutzmann and Mickey Hart used the beat they laid down for “Man Smart, Woman Smarter” as a jump-off point for a particularly captivating drum section which Oteil stuck around for to help the Rythm Devils create a more melodic “Drums.” Mickey Hart moved over to the Pythagorean Beam as Oteil and Billy pounded out the amphitheater shaking rhythms ahead of the re-emergence of the band for “Space.” The band played around with some trippy riffs before Jeff Chimenti inserted a killer piano line which the rest of the band latched onto tightly which turned into a stoney interstellar jam which included tons of blatant “Weather Report” teases before the band slowly ambled out of the “Space” jam which eventually made for the exuberant arrival of the third and final verse of “Viola Lee Blues” which was started much earlier in the set.

Bob Weir then stepped up and belted out a very strong “Looks Like Rain” for its tour debut. The “Looks Like Rain” in Hartford was Dead & Company’s best performance of this song to date, with many audience members noting that it was one of the most powerful renditions of the song heard in some time. Bobby belted out the song with conviction and plenty of emotion which was no doubt the apex of the second set.

Weir’s soulful vocals laid a path for the set-closing bluesy rendition of “Not Fade Away”. which led the audience to sing the song’s refrain and clap out the familiar rhythm long after the band had exited the stage. After a brief break, Dead & Company then said farewell with the evening’s fifth and final tour debut, performing a gorgeous, moving take on the emotion-evoking “Brokedown Palace”.

Set One: Hell in a Bucket, Next Time You See Me, Ramble On Rose, When I Paint My Masterpiece, Cumberland Blues, Black Muddy River, Don’t Ease Me In