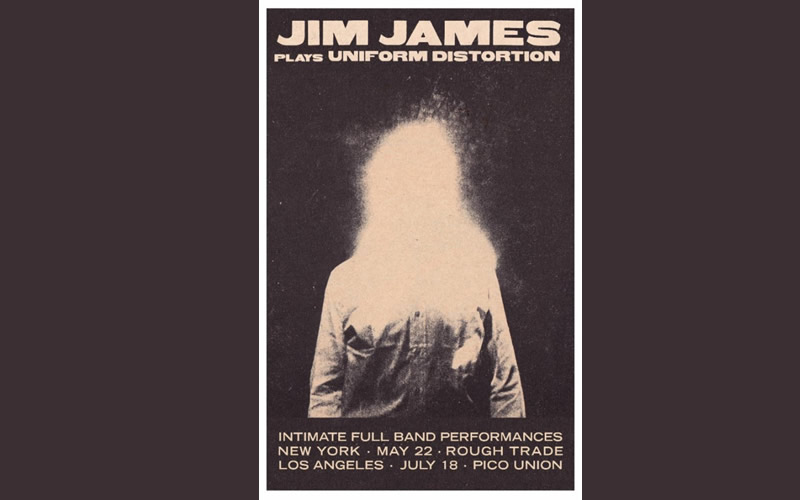 My Morning Jacket front man Jim James is releasing his new solo album Uniform Distortion on June 29 via ATO (pre-order).  This morning, Jim James has announced he will be performing two intimate concerts at venues in Brooklyn, New York and Los Angeles, California. Jim James (or Yim Yames) is the My Morning Jacket front man who will perform his new solo album, Uniform Distortion, with full-band versions of the full record in its entirety at Rough Trade NYC and at Pico Union Project.  The NYC show will take place tomorrow, May 22 and Fangeist will be there and intends to write a full follow up on this unique event.

The LA show happens after the album is out, on July 18 at Pico Union Project. Tickets for both shows go on sale today (5/21) at noon Eastern.

James is also slated to appear on The Late Show with Stephen Colbert this week on May 23 and has one other date on his summer schedule in support of Robert Plant and The Sensational Space Shifters at Berkeley, CA’s Greek Theatre on June 21.

As Jim James’ website notes: “No cell phones, cameras or recording devices will be allowed at tomorrow’s Rough Trade NYC performance. Upon arrival, all phones and smart watches will be secured in Yondr pouches that will be unlocked at the end of the show. Guests maintain possession of their phones throughout the night, and if needed, may access them at designated Phone Use Areas in the lobby. All guests are encouraged to print their tickets in advance to ensure a smooth entry process. Anyone caught with a cellphone in the venue will be immediately ejected.”