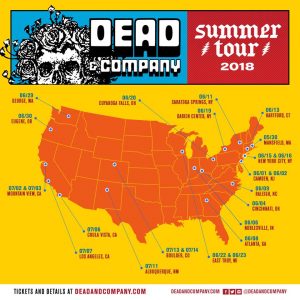 Dead & Company, the offshoot of the Grateful Dead featuring original members Bob Weir, Bill Kreutzmann, and Mickey Hart and amazing new additions John Mayer, Oteil Burbridge, and Jeff Chimenti, is starting their summer tour tonight. Deadheads everywhere are rejoicing like today is Christmas! Any time we have been able to have a summer tour with the band we love at all, especially after losing Jerry, is a luxury that any Deadhead appreciates at a very high level. We all know how lucky we are that the boys are still on the road making the music they love and we love and we do not take this for granted…ever.

The band got together in fall 2015, after the wildly successful 50th Anniversary of the Grateful Dead dubbed, Fare Thee Well, in Chicago and Santa Clara in summer of 2015. The group clearly has come into its own after Mayer and Oteil learned and really enveloped themselves into the massive 200 song songbook of both originals and beloved covers which the Grateful Dead played in their five decades together. This tour might just be the one to head out on the run and go see as many of the dates as you can.

Very late last night, in obvious reverence and excitement of tonight’s tour opener at Xfinity Center in Mansfield, Massachusetts, John Mayer posted a thoughtful, tear jerking and extremely heartfelt note to his Instagram account. He expressed so clearly his undying love for the Grateful Dead and the realization of the fact that he is merely a humble custodian of the songs and so moved by the brilliant words, of which he is now in charge of expounding to the loving and ever loyal Deadheads of all ages.

“I wish I was going to a Grateful Dead concert tomorrow. I wish I was dancing with my friends while we listened to Jerry and the band play,” he wrote. “But it’s the honor of a lifetime to convert my love for this music into the further telling of this beautiful, timeless story with some of its brilliant authors.”

Read the full note which he followed by quoting the lyrics from “Lady With A Fan,” which is the first song of a seven-movement opus and finest, yet unfinished work of Jerry Garcia/RobertHunter, in “Terrapin Station.”

The night before a new Dead&Co tour is always deeply felt. I wish I was going to a Grateful Dead concert tomorrow. I wish I was dancing with my friends while we listened to Jerry and the band play. But it’s the honor of a lifetime to convert my love for this music into the further telling of this beautiful, timeless story with some of its brilliant authors. I’m like anyone else who was ever moved by this music, who was discovered by it, and not the other way around. My love for the Grateful Dead is immense, but not extraordinary. I am in that crowd, just represented from the stage. And I think of Jerry Garcia and his intentions with every song we play. I’m only there so that on my best of nights, you might get to him.
———
“The storyteller makes no choice
soon you will not hear his voice
his job is to shed light
and not to master” 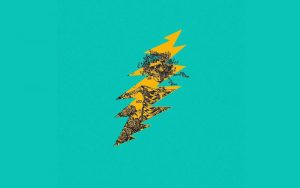 Finally after long last tonight, Dead & Company will kick off its highly anticipated summer tour with a single performance at Xfinity Center in Mansfield, Massachusetts, before hitting a two-night stand at BB&T Pavilion in Camden, New Jersey, on Friday, June 1st and Saturday, June 2nd. Dead & Company and their caravan of hippie fans will follow the band and criss-cross the country with an extensive tour schedule which includes a two night stop at Shoreline Ampitheatre, just outside San Francisco; as well as, the bands 3rd annual two-night July 4th run in Boulder, Colorado at Folsom Field and ending with their first-ever two-night headlining spot at this year’s 6th annual Lock’n Festival in Arrington, VA on August 25th and 26th.

In celebration of the beauty and the beginning of Dead & Company’s annual summer tour, our friends at nugs.tv will broadcast a multicamera pro shot of the entirety of Dead & Company’s Xfinity Center show on tonight, May 30th, FOR FREE in real time. The free webcast and how begins at 7 p.m. ET. Moreover, each ticket fans buy for any upcoming Dead & Company show this tour, as always, will unlock a soundboard version of the audio recording of each of the shows.

Tune in this tonight, May 30th, at 7 p.m. to celebrate the start of Dead & Company’s summer tour and we’ll see you out there!