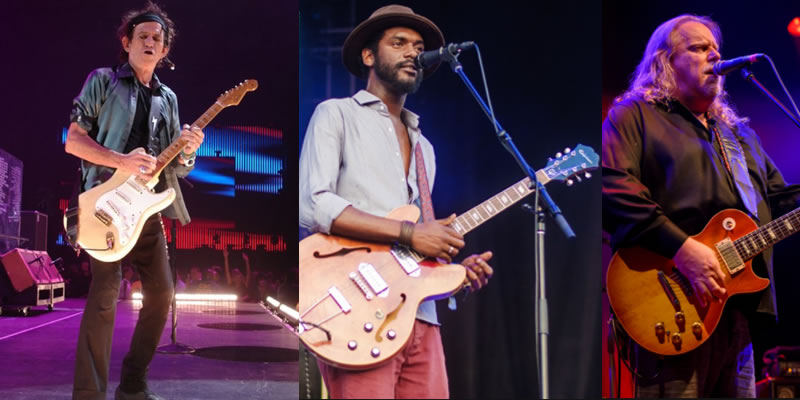 What do you get when you sum countless Grammy winners, philanthropic goodwill, and an all-nighter of pure rock ’n’ roll in one of NYC most famed and storied venues, The Beacon Theatre? Love Rocks NYC! the 2nd annual concert fundraiser for God’s Love We Deliver, a New York–based organization that cooks and home-delivers nutritious meals to or people with severe illnesses (and their loved ones) in need as well as nutrition counseling. A tremendous lineup of stars gathered at New York’s Beacon Theater on Thursday night (March 15) to play the beloved Love Rocks benefit.  The legendary concert was co-presented by designer John Varvatos and real estate broker Greg Williamson, and hosted by the incomparable Whoopi Goldberg. Love Rocks NYC! started two years ago with an idea from Williamson, who tapped Varvatos to co-organize the event. “We’re both very passionate guys for music, and we love this organization. I was very involved with it; John had heard about it. We had a mutual friend who connected us, and we hit it off really quickly. The rest was history,” Williamson explained. Musical icons like Emmylou Harris, Keith Richards, Mavis Staples, and Norah Jones also gathered at Manhattan’s Beacon Theater for the musical affair  but there were plenty of other stars and legends on hand, as well.

Trombone Shorty opened the night and ignited the crowd, setting the tone for a memorable evening to follow. After an inspirational and heartfelt introduction by Whoopie, soul singer Andra Day took to the stage to perform her hit song “Rise Up,” which she dedicated to American veterans, including her father who is a veteran. A series of blues, rock, soul, and folk performances ensued by collaborative performers spanning all ages as well as all genres of music. The entire theatre was dancing and most on their feel, with heads swaying, feet tapping and hands clapping. The night’s musical highlights included Lucinda Williams’s soul-filled performance, Staples’s powerhouse vocals, Jones and Richards’s duet, and Gary Clark Jr.’s masterful electric guitar act. Attendees were so enthusiastic and surprised when Bill Murray appeared onstage, encouraging everyone in the audience to donate to God’s Love We Deliver. At one point in the night, totally unscripted, concertgoers rushed to the front of the stage to shower the famed actor with $100, $50, and $20 bills as donations for God’s Love We Deliver, causing quite a spectacle.

This being one of those massive all-star benefits, different combinations of stars took the stage at different points over the course of the night.

Here, for instance, is a fan-made video of Keith Richards performing the Rolling Stones’ “Happy” with Gary Clark Jr. and Robert Cray:

Here’s Mavis Staples singing the Band’s “The Weight” with Donald Fagen, Marc Cohn, and others:

After a great night of music Fangeist got invited to the private after party of Love Rocks! This was truly a moment where you were thankful that you lived in NYC and got to experience hanging out and singing with the majority of musicians who shared the stage at The Beacon earlier in the evening including Jeff Young with Steve Jordan, Will Lee, Bill Murray, Gary Clark JR, Chris Barron, Eric Krasno, Ivan Neville, Ian Neville, Lucinda Williams, Alecia Chekour, Doyle Brahman, Billy Gibbons, Mark Rivers, Tony Hall and Brett Wilson. This clip sums up what it’s like to hang out with amazing musicians at 3am in NYC after helping to raise over $2 million dollars to feed sick people who can’t do so themselves! #Blessed

God’s Love We Deliver was founded in 1987 to minister with meals to AIDS patients. In 2001, the organization expanded its mission to serve people with all types of chronic illnesses, responding to growing requests for help. To get involved with God’s Love We Deliver, you can do so three ways: Donate, because that’s how the charity makes and delivers meals. Volunteer, because what God’s Love We Deliver does can’t happen without the generous and constant help of their awesome volunteers. And refer people who may need God’s Love We Deliver: neighbors or family members.