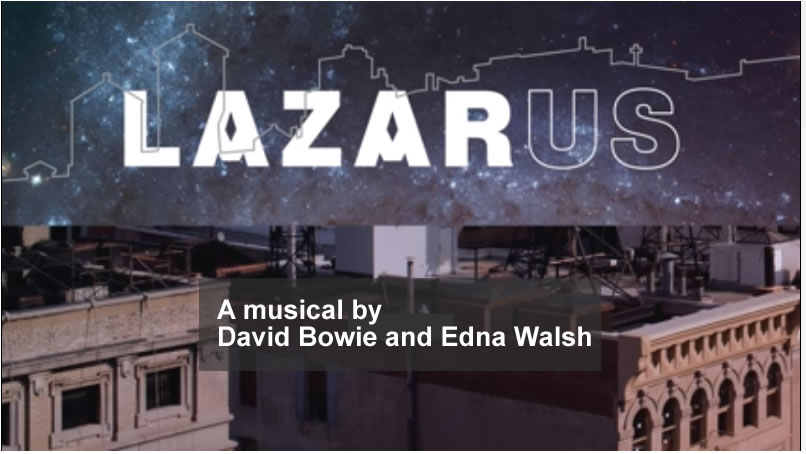 Lazarus is a musical with music and lyrics composed by David Bowie, and a book written by Enda Walsh. First performed at the end of 2015, it was one of the last works David Bowie completed before his death on January 10, 2016. The musical is inspired by Walter Tevis’s novel The Man Who Fell to Earth; Bowie previously starred in the 1976 film adaptation of the same name, directed by Nicolas Roeg. The musical was staged for a limited run at New York Theatre Workshop in Manhattan, directed by Ivo van Hove. Like Bowie’s contemporary album Blackstar (with which it shares the song “Lazarus”), much of the production of the musical was kept secret until its first preview in November 2015. The musical opened on December 7 2015 with a planned run through January 20, 2016. Tickets to the entire NYC run of the musical sold out within hours of being made available. Sadly, Bowie’s last public appearance was at December 7, 2015 opening night of the production.

A London production of the musical was announced in July 2016. The London production ran at the Kings Cross Theatre from November 8, 2016 to January 22, 2017. The London production was filmed for a movie which will make its NYC premiere at Kings Theatre on May 2. Making this a very special one-night-only event, the film will be soundtracked LIVE by the seven-piece band that backed Michael C. Hall and the Lazarus cast during the original off-Broadway run.

If you miss out out on the presale, general sale begins Tuesday, March 20 at 10 AM.