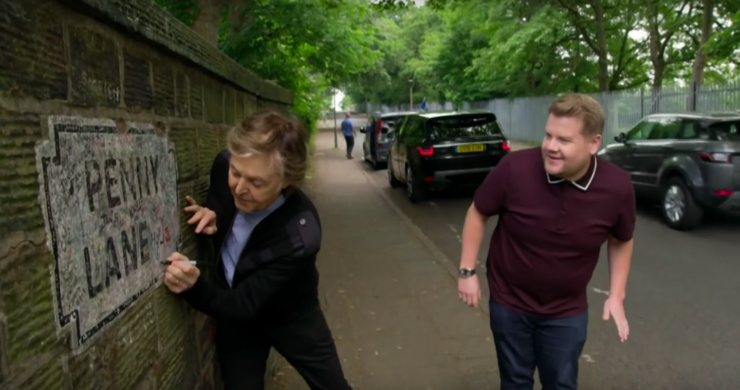 After doing 44 Carpool Karaoke segments on CBS for “The Late Late Show,” host James Corden must have thought he was ready for anything and had seen it all. However, Corden, who is British, no doubt was surprised in segment No. 45 when, Paul McCartney, the former Beatle,  joined him in the Carpool Karaoke Range Rover.  The Two took a trip both to Liverpool and down memory lane.

As they drove around in Liverpool, England, Paul told Corden that “Let It Be” had been inspired by his mother:

Corden honestly replied, “That’s the most beautiful story I’ve ever heard.” Then the two Range Rover occupants launched into the song.

After singing a duet with Sir Paul, Corden was seen clearly wiping tears from out of his eyes. “I didn’t see that one coming around the corner,” he said. Then the two stopped for a selfie at Penny Lane, passed St. Barnabas church (where McCartney was in the church choir) and visited a local barbershop, other stores and all around his childhood home, which he has not been into since he moved out in his early 20s. On the playlist during this 24 minute Carpool Karaoke version: “Hey Jude,”  “Drive My Car,” “Love Me Do,” plus a brand new McCartney song “Come On To Me.” Because Carpool Karaoke is never without its costumes, when Corden pulls out a few hilarious Beatles/old school Paul McCartney costumes, running them by him for advice, the singer did not think it was very cute: “The great thing about your looks is that anyone can pull them off,” Corden says. “Carry on driving,” McCartney replies. “Just stick to polo shirts and jeans.”

The whole hilarious and sometimes emotional segment is done in classic Corden fashion, the whole segment is chock full of self-deprecating humor. Sir Paul is full of introspection and extremely self-reflective as he is lamenting on his life, achievements and how far he’s come. Carpool Karaoke wraps up with an intimate concert at a Liverpool pub that The Beatles used to play many moons ago, while shocking its current unwitting patrons.

Earlier this week, Paul McCartney announced the coming release of his new album, Egypt Station, on September 7th via Capitol Records. Listen to the first two tracks from McCartney’s new album below: