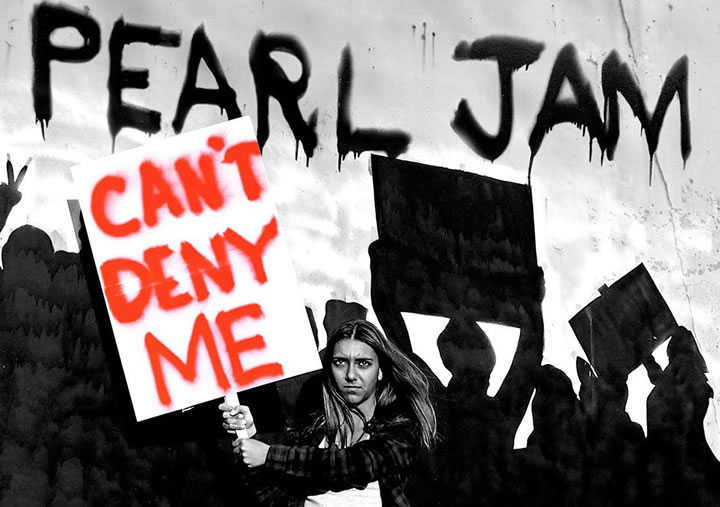 Pearl Jam fans can’t deny this good news. The veteran band premiered their new song “Can’t Deny Me” on Tuesday. The band confirmed the single will appear on a previously undisclosed forthcoming album coming out via Monkeywrench/Republic Records. This is the group’s first new original release since 2013’s “Lightening Bolt.”  Sparking speculation that it was part of a potential new record, “Can’t Deny Me” was privately released to Pearl Jam fan club members over the weekend.

The band recorded this song in Seattle in February. The track’s lyrics blatantly calling out the US government were written by frontman Eddie Vedder and guitarist Mike McCready provided the music. Bassist Jeff Ament worked with videographer Kevin Shuss to develop the artwork for the single’s release.

Co-produced by the band and their longtime collaborator Brendan O’Brien, “Can’t Deny Me” certainly appears to take direct aim at President Donald Trump — albeit without mentioning the Commander-in-Chief’s name.

Pearl Jam singer Eddie Vedder has consistently and frequently called out Trump and his regime’s hypocracy during his performances since the election, including taking a knee in solidarity with former San Francisco 49ers quarterback Colin Kaepernick, who Trump and his cabinet have consistently attacked because of his protests against police brutality, as well as using it as a talking point to take aim at African American NFL players while encouraging the owners to force their players not to kneel during the national anthem.

Pearl Jam’s last studio album was the O’Brien-produced 2013 release Lightning Bolt.  This is poised to be a busy year for Pearl Jam, as the band will play a series of stadium shows in South America, Europe, Seattle, Boston and Chicago  throughout the summer.

Stream “Can’t Deny Me” below