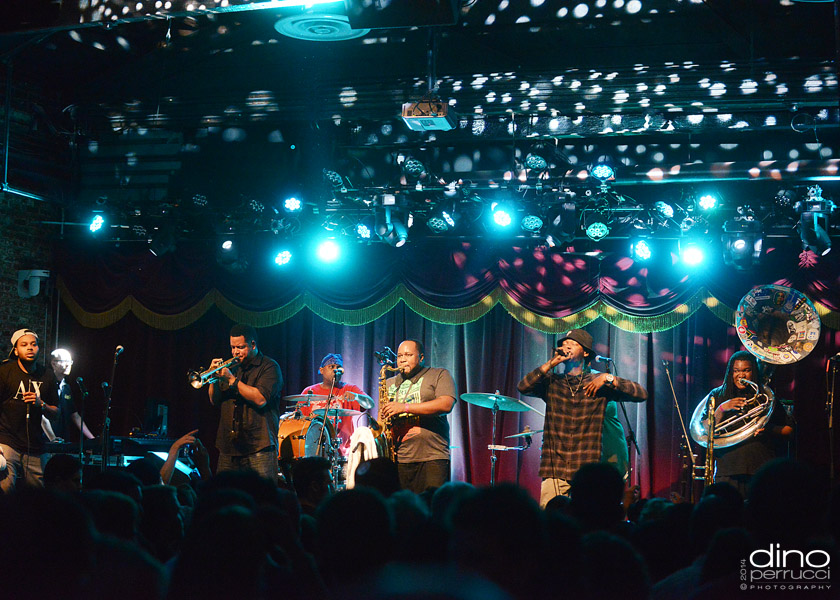 The show opened with a shout-out to Prodigy during a cover of Mobb Deep’s “Quiet Storm.” From there, they gave the Bowl more of their NoLA-style brass and funk, with many of the brass players adding in vocals. It’s hard not to get down when a band has the sousaphone performing the typical job of a bass guitar. During the course of the night, the audience was treated to covers and teases, including Nas’ “If I Ruled The World,” Lauryn Hill’s “Doo Wop (That Thing),” A Tribe Called Quest’s “Can I Kick It?”, Chaka Khan’s “Ain’t Nobody,” Chance The Rapper’s “No Problem.”

Special guests Smoke Dza and Curren$y were called up onstage to rhyme over the funky brass background. The two rappers were onstage together for a couple of songs, delighting the hip hop fans in the crowd. Unfortunately, Gza never made an appearance on Friday, but the enthusiastic crowd was thrilled with the show, as everyone could be seen dancing. The three-night run continues on Saturday night, 3/24, with billed special guests Marcus King and Snarky Puppy’s Cory Henry. It should be a rock-funk-brass fusion night to please most audiences as the band ends their mini-Bowl residency.