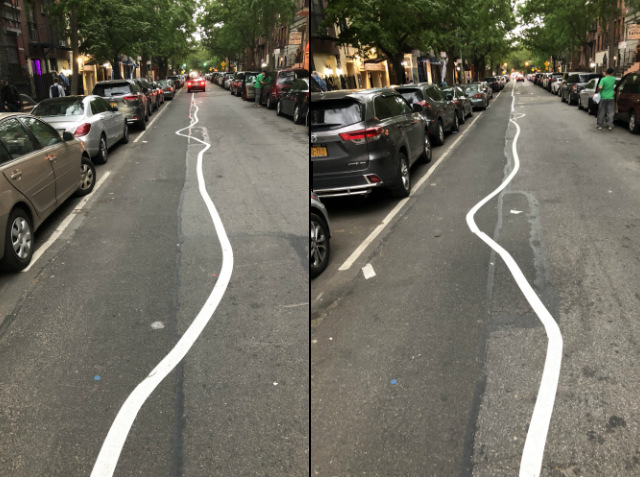 This Is Your Bike Lane On Drugs

Unless you’re stuck in a time machine, the consensus has it that most rational residents of New York City can clearly see the upside of the new bike lanes that the city has commandeered from our roads (or uber parking lanes) since 2011. Every statistic in the world admits that they make the city safer for cyclists and drivers alike; however it is clear as day that there are still not quite enough of them just yet. But just as Sheryl Crowe sings “every day is a winding road,” so too are some bike lanes psychedelic journeys into the unknown.  Make a wish, hold your breath, count to three, spin around three times and with me and Lucy in the sky with diamonds and you’ll be in a world of funky bike lanes.

Thanks to an eagle-eyed NYC resident, we came upon this zany and clearly swirling bike lane line in the East Village at 10th Street between 1st Avenue and Avenue A. We know the East Village is known for its non conformity and its residences have a well-established reputation for having no regard to walking a straight line –the way this bike lane is drawn it looks like the NYC DOT worker was either macro doing on the job or on tour with the ‘Reluctant Psychonaut’ Michael Pollan.

What happened here? Did the DOT worker get excited that Phish announced their summer tour and Las Vegas Halloween? Did the person painting the lane get into a heated argument with a coworker about Laurel vs Yanny at precisely the moment they hit 10th Street? Was it just an attempt to throw off cyclists to make sure they’re really paying attention and wearing their helmets? Is the bike lane straight, and you’re the one who’s still twisted from last night?