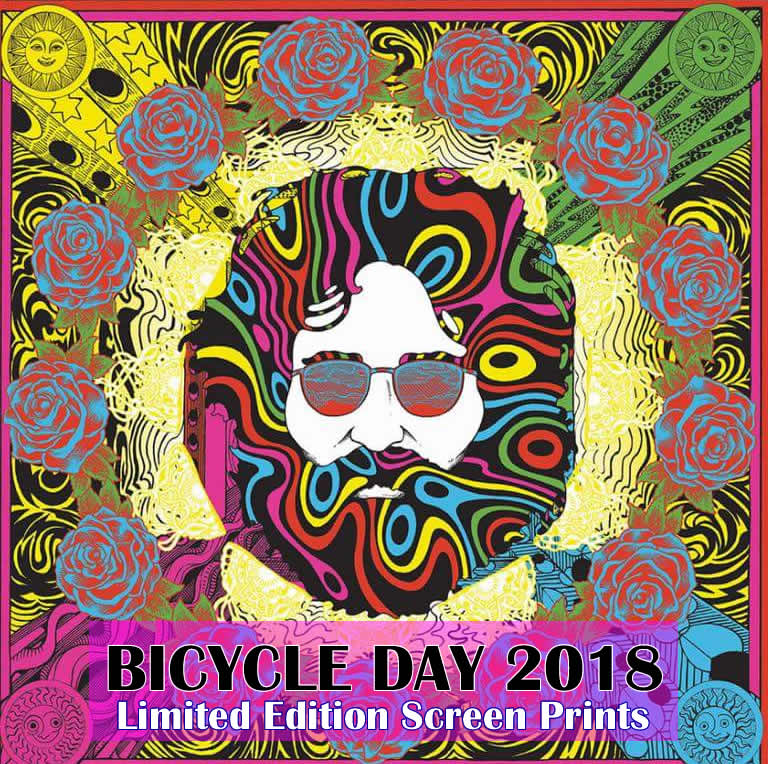 Today is the 75th anniversary of the first “Bicycle Day” 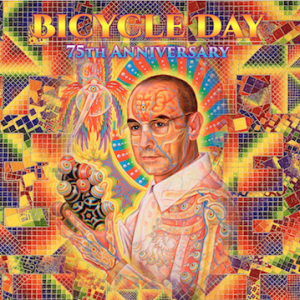 On April 19, 1943 at 4:20 p.m. — 75 years ago today — the Swiss chemist Albert Hofmann deliberately ingests 250 micrograms of LSD in the presence of his lab assistants at the New Products Laboratory division of Sandoz Pharmaceuticals in Basel, Switzerland.

Three days earlier, on April 16, Hofmann had accidentally absorbed a minute quantity of LSD through his fingertips and, in his words, experienced “a remarkable restlessness … a not unpleasant intoxicated-like condition characterized by an extremely stimulated imagination.”

In the hope of confirming the alkaloid as the triggering agent, Hofmann takes history’s first LSD trip on April 19. Within 40 minutes, he encounters “dizziness, a feeling of anxiety, symptoms of paralysis [and a] desire to laugh.”

After he took it, his perception changed dramatically. So much so, in fact, that he decided to ask his lab assistant to take him home. At the time, war restrictions were in place, so they had to make their way to Dr. Hofman’s house riding a bicycle. Later that afternoon, as Hofmann bicycles home, he’s overcome by panic, which he later calls a “most severe crisis,” not knowing if he’s taken a dose that will mentally impair him, last forever, or kill him. (The experience is celebrated as “Bicycle Day.” throughout the world every April 19…which is TODAY!! ) 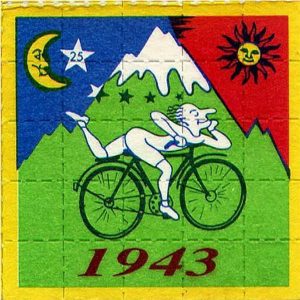 Once home, the chemist undergoes “demonic transformations of the outer world,” and has to lie down. Thinking he has poisoned himself, he drinks two liters of milk. Eventually, the effects subside and he is able to “enjoy the unprecedented colors and plays of shapes that [had] persisted behind my closed eyes … kaleidoscopic, fantastic images.”

In 1938, Hofmann had synthesized a series of derivatives taken from Claviceps purpurea (or, ergot), a fungus found on rye kernels, in the hope of finding a compound that could serve as a circulatory and respiratory stimulant.

On his 25th synthesis, Hofmann created lysergic acid diethylamide. However, it was eventually set aside in favor of other projects. It would remain shelved for the next five years, until Dr. Hofmann decided to work with it again on April 16th, 1943.

“Five years after the first synthesis, I could not forget LSD-25,” wrote Hofmann in his 1979 book, LSD — My Problem Child. “A peculiar presentiment — the feeling that this substance could possess properties other than those established in the first investigations — induced me to produce LSD-25 once again so that a sample could be given for further tests.” 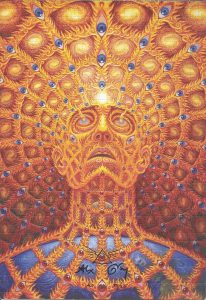 While synthesizing the new sample on April 16, 1943, Hofmann accidentally absorbed a trace mount a noticed that it had several strange effects. He began to experience a change in perception, a slight dizziness and a slight increase in respiration. Effects which lasted for about 2 hours. It was at this moment that he decided that the properties of LSD had to be examined more closely. When he recovered from his experiment the next day, he felt that LSD would eventually be used in a clinical sense as a psychiatric tool. Little did he know that it would explode in popularity as a recreational drug.

From 1949 all through the 1950s, this drug was being tested by the United States as one that might have clinical applications. During the time, LSD was tested as a drug used to treat a number of different diseases which included alcohol addiction, anxiety, and psychosis. It was also a drug that was given to patients for use during psychotherapy. However, many psychiatrists began to use the drug for their own use and also began to distribute it among their friends.

In 1965, LSD production was officially halted but many home chemists had already begun manufacturing the drug themselves and LSD proliferated throughout large segments of the population. Right after its official production was stopped, LSD was categorized as a “Schedule One Drug” according to the Controlled Substances Act, thereby making it illegal to manufacture or distribute – except for scientific research.

Albert Hofmann’s obituary in Rolling Stone declared that his discovery of LSD-25 and his subsequent experiments with the hallucinogenic were responsible for a “tectonic shift in consciousness.” Three weeks before the chemist’s death in 2008, Hofmann promised to “renew serious LSD research, either from this side or the other.”

“We’d been waiting for a long time and all of a sudden our local pot dealer said, ‘I’ve got something new … here it is – LSD!’ The big breakthrough, the big change, was psychedelics,” says Garcia. “A bunch of our friends, about eight or nine of us, took it and we spent a night of discovery.”

“There was a little moment, about a year, when the government didn’t know about LSD and it wasn’t illegal. All of these things were happening. It was a great year, one super year ! We were the empiricists in this world, we were the ones who were trying it, we knew what it was doing and that’s what we were using it for. I can say our lives have never been the same.”

Today, I came across an article about Mountain Girl, Jerry Garcia’s wife and mother of 3 of his children, getting to meet Albert Hoffman just days before he passed away at 102. She brought with her a diploma from the Acid Tests of the 60’s and signed it for him to make it official.

Here are her words on the subject:

Dear dear man, a ball of energy, and so useful and kind to spirited people, and women, and all of us, sadly, he’s gone. 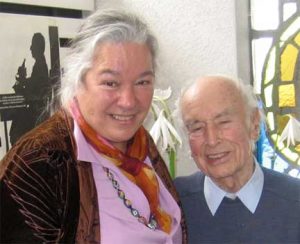 I was fortunate that he lived long enough for me to meet him, he kindly invited me up to his house, just 4 weeks ago. March 24th. Life has some twists and I caught one. Sad, but good. At 102, yes.

I had given a speech at the World Psychedelic Forum in Basel, home of historic medieval alchemists, over the weekend, and was honored to be asked to meet the great wizard himself. It was a lovely ride up into the hills, going from Easter flowery spring to howling winter in a few klicks. His house perches over a great fall of fields down to France on one side, and back to solid snowy Switzerland on the other. It’s a concrete flat-roofed modern home, not large, set with cherry trees and swaying alpine firs, pasted with ice.

His dear wife had just passed away around Christmas, after a long illness, and you could see how hard it had been for him, that he’d been through a terrible ordeal.
He was so sweet to me, chatted and joked about musicians and black market LSD, chocolate and cherry trees, instructed me very seriously about the importance of hanging upside down every day, to improve the blood flow to the brain.. The snow flying outside, I sat on the warm polished wood bench by the window and he sat in a small ornate chair, with an ornate brocaded footstool. We compared chocolates. His old friend Juri Styk brought along some little cakes which we split up but no one touched.

I asked him about purification of LSD, wasn’t it a long process? He denied it vigorously, saying ” LSD is very easy to make, you just do the recipe and if it crystallizes, that is it, it’s done and very pure. No need to do anything else. ” And then launched in to a rapid exchange in German with his lovely daughter sitting on the couch, a petite elegant mother of two paying very close attention to her father. ( Juri later told me it was about Dr. Hofmanns eldest son, who had rejected LSD all his life till just recently, and then absolutely loved it and wanted more.!)

I wish my German had been better, I could have spoken to him more easily. His English was excellent, anyhow, and I told him a little about the Grateful Dead, and he lit up and said he had always been hearing about them, they played existential music, yes? And from small beginnings, it got large? With the help of LSD, the energy and telepathic melting together as they played… he understood that. He asked about Jerry. And Juri reminded him about the Acid Tests, and he lit up again and said “Oh yes, the Acid Tests. and the Grateful Dead played there long ago?, and you were there? ” And I smiled, yes, and pulled out the Acid Test diploma I had made for him. I presented it in the usual fashion, saying that he had proven beyond doubt that he had fulfilled all the requirements and had certainly passed the Acid Test, and had earned this Acid Test diploma!

He took it and tried to read the PaulFoster decorations, and then had me sign it, with both my names, and date it. He said it was no good unless I signed it. I took a picture of him holding it up. He was really delighted! Not just being polite, either, but actually giggling. 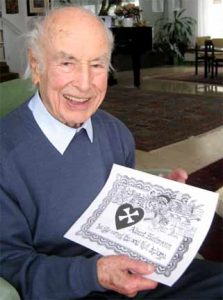 Dr. H. bragged proudly that he now had three women to look after him. And he hoped they wouldn’t argue about him.

And then it was over, and we stood up, and Dr. Hofmann staggered, almost fell as he got to his feet, and I steadied him up. He must have weighed about 85 pounds, so small and light. And perfectly mannered, took my arm and walked me to the door. Juri took a final picture of him with my camera, and the doctor smiled and asked me to come back, and bring the sun, please. The wind whipping the snow out of the trees as silent puffs of feathers. The walkway to the car was thick with ice. A few cat tracks showed the way. I didn’t get to meet the cat, who sleeps on the doctor’s bed since his wife passed away. Now where’s the cat sleeping tonight?

I had been thinking hard yesterday and today, about getting this meeting all written down, as the conversation ran to many topics in my short hour or so with him. I wrote a couple of letters to friends today, about my visit with the great man, and didn’t realize he was dying today. Chances sometimes only come once, and I’m so glad I took this one. I’m really sad, mostly for myself. Wanting more, not to be.

All my love to my dear, living friends, MG