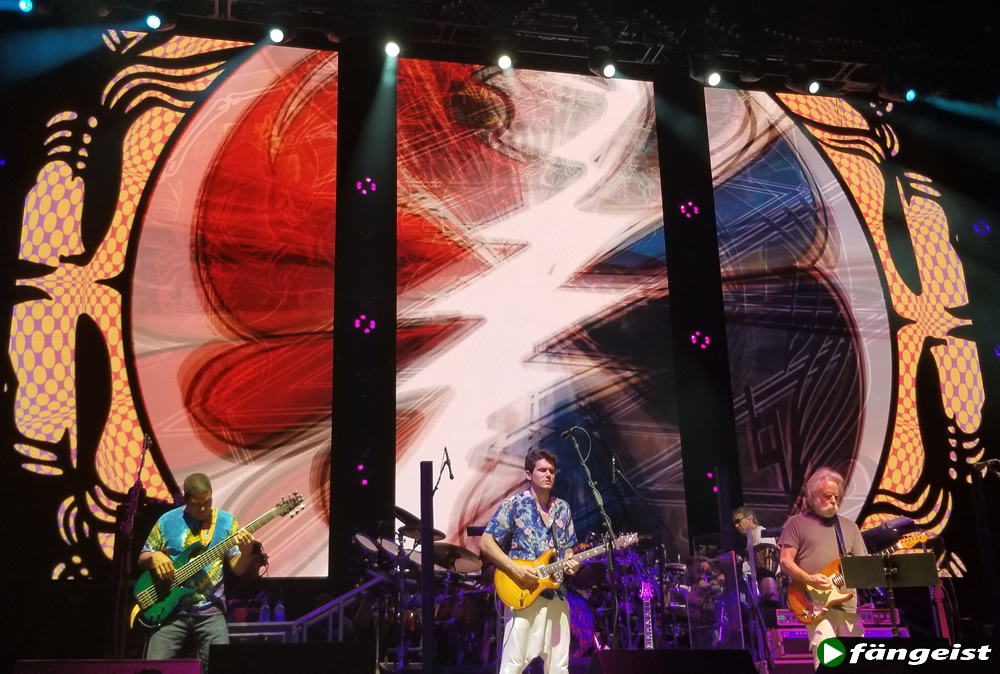 On Saturday night, July 7, Dead & Company finished their West Coast Summer Tour and played to 30,000 fans at Los Angeles’ Dodger Stadium. Less than 24 hours later, they played to 200 wealthy philanthropic fans at a benefit Sunday night in a backyard in the Hollywood Hills for Oceana, an environmental organization dedicated to preserving the world’s oceans.

“Going from a stadium to a house party is a very interesting dynamic, but the point is a musician is privileged to be a musician and musicians should give back that privilege,” said drummer Mickey Hart after Dead & Co.’s 65-minute show. “In general, you gotta defend the treasures. One of them is the oceans and you have to defend it however you can. You have to fight the evil that’s in the White House now with everything you have. So any night I can raise a million dollars is a good night.”

I was standing thisclose to the stage at the @Oceana benefit featuring @deadandcompany with @johnmayer on vocals.

The evening was dubbed “Rock Under the Stars” and guitarists Bob Weir and John Mayer, bassist Oteil Burbridge, keyboardist  Jeff Chimenti and drummers Mickey Hart and Bill Kreutzmann raised more than $1.1 million and drew more than 150 Deadheads from all over the globe, who paid $5,000 each to see the former members of the Grateful Dead play one of their most intimate gigs together. Other celebrities of note which attended include actors Ed Begley Jr., Jeff Goldblum and Dean Norris, actress Kelly Lynch, Academy Award-nominated composer Thomas Newman, film producer Roger Birnbaum, producer/screenwriter Mitch Glazer and the band’s attorney Eric Greenspan, who years ago in the college in the 1970s promoted a Grateful Dead show.

Other donations from philanthropists unable to attend include Seth MacFarlane who donated $250,000 and Len Blavatnik, head of Access Industries (which owns Warner Music Group) and his family gave $50,000, said longtime manager Keith Addis, who hosted the event as his home — previous “Rock Under the Stars” featured Sting in 2016 and Don Henley last year. Addis, who is president of Oceana’s board of directors, has been involved with the environmental cause for more than 25 years, ever since his client, Ted Danson, formed American Oceans Campaign. Oceana, which launched in 2001 and merged with AOC a year later, has gone from a $4 million annual budget to $40 million. “We want to make sure that for the next 100 years, there’s enough wild protein in the healthy oceans to feed the one billion people every day who depend on it for their sustenance and for the 400 million jobs that depend on healthy oceans,” Addis said. “It’s a big job to do it,” he added, especially with an administration that has been cutting regulations that protect the environment. “Do I wish we had the wind at our back and it was a different world? Of course, I do, but this is what we’re dealing with and [our work] feels more important now than ever before.”

Addis landed Dead & Company after one call to Bernie Cahill, who is the band’s co-manager along with Irving Azoff and Steve Moir. “Normally it takes me three months to get a band to commit to do this based on their busy schedules and all the other puzzle pieces,” Addis said.

“We get asked to do a million of these things,” Cahill said, adding that “Rock Under the Stars” was Dead & Co.’s first private charity event since forming in 2015. “They’ve very focused on the health of our oceans,” Cahill continued. “Bill lives in Hawaii, Bob lives on the water. Oceana really resonated with them.”

“We don’t do that many [benefits],” especially house parties. It seemed like the right thing to do at the right time. The oceans are really in need,” Hart said, adding that Dead & Co. had Headcount‘s voter registration booths at every show and through that effort, the notoriously philanthropic band has register thousands of people for the 2018 mid-term elections and beyond. “We’ve been registering people at every show for years,” he said. “The kids, everybody, just have to realize how important it is. You’ve got to get up off your asses and pull that lever.” Bob Weir sits on the Board of Directors of Headcount and has been involved with the voter registration organization since inception.

Day 18 #livingdeadroadtrip Once-in-a-lifetime experience: on their day off, @deadandcompany with @johnmayer @oteil_burbridge & Jeff Chimenti played a fundraiser for @oceana — in someone’s backyard. Oceana is a great young environmental organization doing some novel and very effective work protecting the world’s oceans, but they need support now more than ever. Laws protecting the environment need to be protected. For example, the critically important endangered species act, something that I worked as a grassroots organizer to defend back in the early nineties, is under attack yet again. Check out @oceana and their work. ❤️⚡️💙 #deadandcompany #deadtour #oceana . . . “Some come to laugh their past away Some come to make it just one more day Whichever way your pleasure tends If you plant ice you’re gonna harvest wind” 🎶