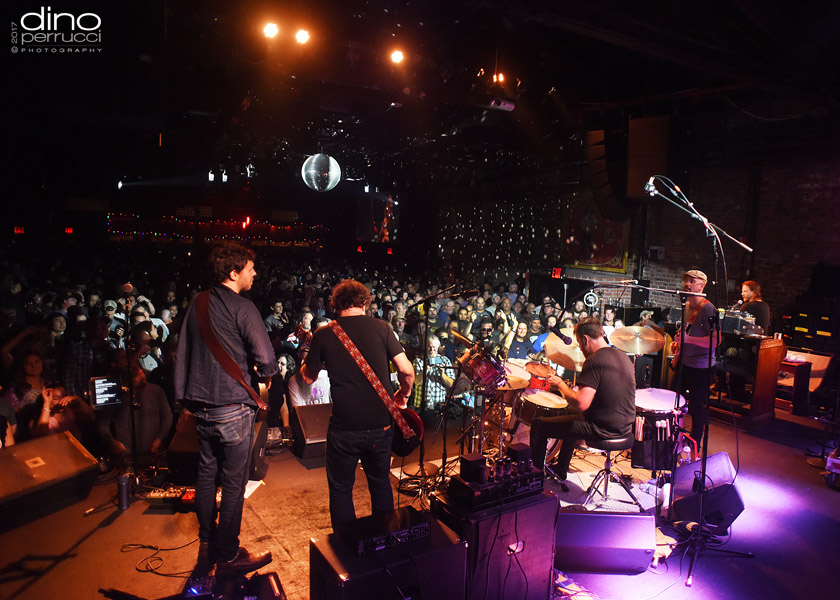 Night one began with Marco letting loose on the keys for Alligator, which rolled nicely along into a quiet and smooth St. Stephen. St. Stephen is a song that the boys of JRAD can really open up and rage on, but this was a very beautiful version of that Dead classic. From there, they went into Dupree’s Diamond Blues, with Scott Metzger ripping some really cool solos. King Solomon’s Marbles began with a lovely Marco jam on the keys, then Metzger hitting some really spacey far-out sounds on his guitar, and Russo slamming the drums, octopus-style. As Victor Cornette dimmed the lights over the crowd, the boys brought us into a rocking Only Daddy That’ll Walk The Line, a cover of the classic Waylon Jennings tune. This was a roaring, bend-your-knees style jam, with the whole band picking up the pace and the entire crowd getting DOWN! The first set ended with a raging Touch Of Grey, with Tommy Hamilton on vocals. “We will get by!!” A perfect way to end set one of this glorious three-night run!

The second set was an absolute monster, with the boys touching on some of my all-time favorite Dead tracks. The set opened with The Golden Road (To Unlimited Devotion), which typically is not at the top of my list of favorite Grateful Dead songs….but man did these boys slay this tune!! It was hands down the most rocking version of the song I’ve ever heard….which is to say, EVER! Metzger was ripping on his guitar, Russo was looking out over the crowd, just nailing the drums. As the blue lights came down over the crowd, the boys went into an uptempo rocking Jack Straw jam. This was one of the more interesting and unique Jack Straw’s that I have heard JRAD do, switching tempos between super fast-paced and very low and slow. All the while, Victor Cornette is setting the mood with the lighting on the crowd. As they got to the “Leaving Texas, 4th day of July” part of the song, it was Tommy’s turn to let loose, and he let it rip with a huge solo. Jack Straw led to Hell In A Bucket, which would undoubtedly be on the theme song to most of our lives (“I may be going to hell in a bucket babe, BUT AT LEAST I’M ENJOYING THE RIDE!”). Hell In A Bucket saw another solid, steady Tommy Hamilton solo. Up next was another Dead classic, Scarlet Begonias. Scarlet gave bassist Dave Dreiwitz and opportunity to shine, as he and Marco provided some stellar moments. As the track picked up in intensity, the crowd responded with equal enthusiasm, just losing it. The energy was so high in Brooklyn Bowl that the boys on stage couldn’t help but get a good laugh in. It was clear how much fun EVERYONE in the place was having. Scarlet fed into I Know You Rider, which again had the crowd going bananas. As the band went into “I wish I was a headlight…on a northbound train,” the white house lights opened up over the crowd, and I thought the roof was going to come off of the place. To end set 2, the boys slowed it down a little for a beautiful and soulful Stella Blue. Appropriately, Victor let a a blue light was over the crowd, as we all swayed and loved. Again, a perfect way to end set 2.

Many in the crowd recognized that March 8th was International Women’s Rights Day, so there was an air of anticipation for a Men Smart, Women Smarter at some point during the show…and the band would not disappoint! The encore began with Tonight I’ll Be Staying Here With You, which led into a raging Men Smart, Women Smarter, to the delight of everyone in the crowd. The band ended a perfect night of music with Not Fade Away, with the audience singing and clapping along, in historic Dead fashion. It was truly a wonderful night of song and dance at Brooklyn Bowl.