Bob Weir, Jay Lane & Don Was to Tour This Fall as Wolf Bros

After posting an intriguing picture inspired by the state flag of California with a wolf on the flag on his social media yesterday, Bob Weir has officially announced a new project, Wolf Bros, featuring bassist and producer Don Was and drummer Jay Lane (formerly of Bob Weir’s RatDog, Furthur and Primus), with whom Weir will tour this fall. 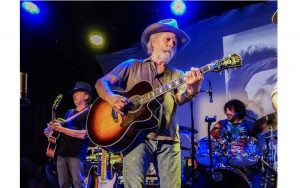 Bob Weir and Wolf Bros promises to offer performances “exploring songs of the Grateful Dead and more in a trio setting,” and the group members will join forces for a 19-stop Fall Tour, kicking off October 16 in Reno, NV, and hitting venues in Los Angeles, Seattle, Salt Lake City, Denver, Chicago, Nashville, Washington, DC, Philadelphia and Boston, plus a two-night run at Port Chester, NY’s Capitol Theatre November 9–10 and a tour-closing date at New York’s Beacon Theatre on November 18. Check out the full dates below.

“Wolf Bros is something that really took its roots back in the spring of 2015 when Don Was came up to TRI and helped us piece together Dead & Company,” Weir says in a press release. “For a while now I’ve been itchin’ to explore our songs in a trio setting. An upright bass, my acoustic or electric guitar and a drummer. We did some rehearsals this past spring and it was big fun—and that’s the whole idea. We were kickin’ around Dead songs as well as tunes from my back pages. I’m pretty sure we’re gonna have a big adventure with this…”

Fans can sign up for the Ticketmaster Verified Fan Presale now through Monday, August 6 at 5pm ET by clicking here. Enhanced Fan Experiences will also be offered on the tour including a premium ticket in the first 10 rows, sound check access, a show-specific exclusive poster, and more. Enhanced Fan Experience details can be found by clicking here. Tickets will be available to the public on Friday, August 10 at 10am local time.