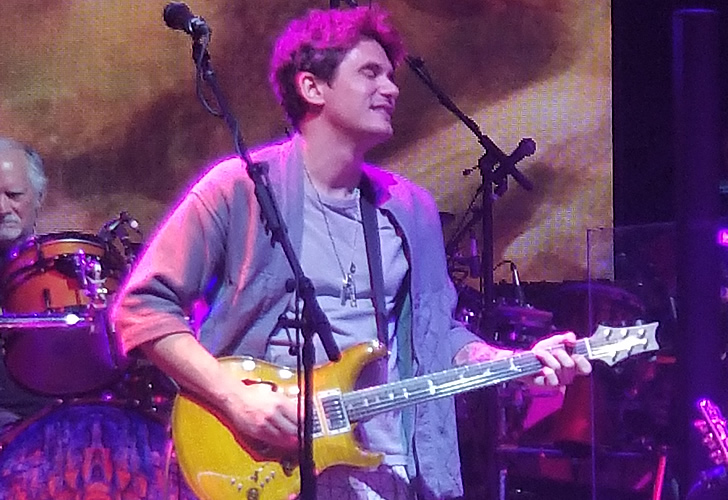 John Mayer launched his music career in the late 1990s and in 2001, released the album Room for Squares and two years later, debuted Heavier Things. Both efforts were commercially successful, multi-platinum albums that spawned several hits, including Grammy-winning songs like “Your Body Is a Wonderland” and “Daughters.” Having established himself in adult contemporary rock, Mayer broadened the scope of his sound to incorporate the blues, forming the John Mayer Trio in the mid-2000s. In 2015 he collaborated with Grateful Dead’s Bob Weir to form the touring band Dead & Company.

John Clayton Mayer was born on October 16, 1977, in Bridgeport, Connecticut. John was the middle child of parents Richard and Margaret, who were both teachers. Mayer became interested in learning guitar after seeing Michael J. Fox’s guitar work in Back to the Future. After listening to a cassette tape of iconic blues artist Stevie Ray Vaughn, Mayer began practicing and growing his love and knowledge for t he blues genre, listening to other legendary blues artists such as Otis Rush, B.B. King, Lightnin’ Hopkins, and Buddy Guy.

In 1997, Mayer enrolled at Berklee College of Music however, he quit two semesters later. With his friend Clay Cook, the two decided to move to Atlanta and began performing at local venues as the short-lived group LoFi Masters. With the emergence of the internet, Mayer began gaining a voracious online following which continues to this very day. After making a huge impression at the SXSW Music Festival in 2000, he was signed to Aware Records.

In 2001 Mayer released his first full-length album Room for Squares, which spawned hits like “No Such Thing,” “Your Body Is a Wonderland,” and “Why Georgia.” The album was critically praised and a multi-platinum commercial success, winning Mayer a Grammy for Best Male Pop Vocal Performance in 2003 for “Your Body Is a Wonderland.” Mayer followed up with his sophomore album, Heavier Things, which also did considerably well, reaching the top of the Billboard 200. One of its releases, “Daughters,” won the Grammy for Song of the Year.

In 2005 Mayer began shifting his musical direction, focusing on the genre he first fell in love with: the blues. Teaming up with musicians Pino Palladino and Steve Jordan, Mayer formed the blues and rock band the John Mayer Trio. The group released the live album Try!, which received a Grammy nomination for Best Rock Album.

In 2006 Mayer released his third studio album, Continuum, which received a Grammy for Best Pop Album and another Grammy for its single “Waiting on the World to Change.” With yet another huge success under his belt, Mayer felt skittish with starting a follow-up album, but he forged ahead with the release of Battle Studies in 2009. Despite mixed critics’ views, the album did well and its arena tour garnered an impressive $45 million.

After doing a distasteful interview with Playboy in 2010, along with other incidents that became tabloid fodder, Mayer retreated from the spotlight and re-focused on his music. However, in 2011 he discovered he had a granuloma on his vocal chords and had to undergo extensive treatments, delaying the release of his album Born and Raised until 2012. After his health recovered, Mayer was recording and touring again, and the following year he released his country-inspired album Paradise Valley. Around the same time, he developed a strong interest in the Grateful Dead’s music and eventually created a new touring group Dead & Company with Bob Weir.

In the fall of 2016, Mayer released his single “Love on the Weekend,” which became the lead single from his seventh studio album, The Search for Everything.